The Accidental Witch was a bestseller on Amazon for three weeks in a row.  Now the sequel, The Darkest Art, comes out today!  This book is second in this trilogy of black magic and dark spirits.  Come join Phaedra Black as she dispels the demons lurking in the swamps of
Alabama. 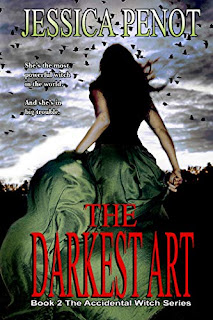 Phaedra Black is having a rough year. Her marriage fell apart, she lost her license to practice clinical psychology, and she was fired from her job at the hospital in her home town of Dismal, Alabama. But those are the easy problems. Phae is also a witch, one with a prophesy hanging over head. A prophesy that claims her as the Phoenix, the most powerful magical force in the world. And the most destructive.

Phae only trusts two people—her best friend Diane and her boyfriend Frederick Navarre. Diane is an oracle, when she’s not working twelve-hour shifts at the hospital. Fred is a warlock and Phae’s touchstone and teacher. Without him, Phae feels completely lost. The trouble comes when Fred leaves to go on some unknown quest. He doesn’t tell her anything except to avoid magic at all costs. Easier said than done. Phae’s new job as a counselor at a methadone clinic is exhausting, pointless, and pays peanuts. Her boss and co-workers are miserable, rude, self-centered people who should be in rehab themselves instead of helping addicts, and her beautifully restored plantation house, the Black Magnolia, put her in the red. With her bills piling up, Phae is at her wits end. Not even Diane, who’s moved in with her, can help. She has no choice but to use her magic, sparking a chain of events that takes her down a road of no return. Her power begins seeping out into the world and no matter what she does, she can’t control it. When she gives her boorish boss a tail and turns the condescending clinic doctor into a tin of coffee, Phae realizes the immense force she has inside her will continue to grow and leave a trail of doom behind her. Worst of all she finds out that The Guild of Witches wants her dead and it has nothing to do with not paying her annual dues. In desperation, Phae turns to an ancient demon who promises to help her. She accepts, but his assistance comes with a steep price and consequences bigger and more catastrophic than Phae could ever imagine. With no choice left to her, Phae has to undo what she’s unwittingly set in motion, or she could lose everything and everyone she loves.
Email Post