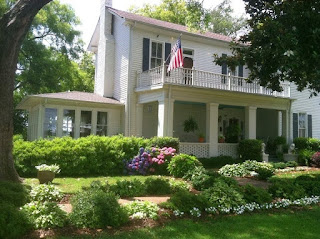 The Lowry House is a historic home in Huntsville, Alabama. It was built circa 1850 by John Tate Lowry, a merchant with the firm of Lowry, Hamilton and Company. Elements of an earlier Lowry family log house, built in 1809, that stood on the site were incorporated into the new construction.  The Historic Lowry House, a 3000 square foot Italianate-Federal style home, was purchased by Louie and Jane Tippett in 1998. After an extensive 4 year restoration process, The Lowry House was restored to its original beauty, and placed on The National Register of Historical Places.  Many ghost stories surround the home about a young bride, Anne, who people have claimed to see in the upstairs window.

People claiming to be able to detect the presence of spirits have told the current owners that one of the ghosts at the Lowry House is that of a child.  They have researched the history of the House for mention of a child having died there but found nothing. There are gaps in the history. They do know that a doctor lived there, Dr. Lowry, and that he may well have treated patients out of the House. It's certainly possible that a child died there at some point.  Run away slaves were hidden at Lowry House at some point and it is possible that one of them was a child.

To read about the many ghost hunts and paranormal experiences at the Lowry House go to:  http://evilcheezproductions.blogspot.com/2014/09/the-face-in-window-and-shadow-behind.html