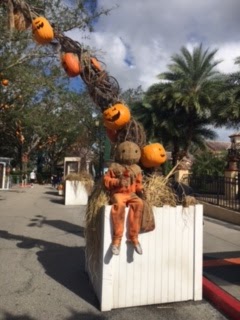 Universal Studio’s Orlando Halloween Horror Nights is a Halloween Horror extravaganza that can be rivaled by none.  I have spent a decade reviewing haunted houses and visiting haunted locations.   This is the ultimate haunted experience for lovers of the dark and macabre.  This is my second year attending Halloween Horror nights and 2017 was a much better experience than 2016 for me.  I say for me because there is a significant amount of personal preference involved in ranking Halloween Horror Nights and their events.  My entire group agreed that this year was better than last year, but when it came to ranking the houses we fought for the better part of an hour.  Due to this, I am going to do two separate rankings on the top 3 features of 2017 Horror Nights.  The first ranking is my perspective.  The second is a group perspective based on other people I have talked to.  I will post this later in the week.

Halloween Horror Nights consists of 8 separate themed haunted houses that all contain the budget that would be expected of a theme park.  They also contain 6 scare zones.  Our group usually enjoys the scare zones as much if not more than the houses because these are areas of the park decorated and themed to submerge you in a horror experience you can be part of and linger in.  The houses are more intricate but contain guards that yell at you to “move along” if you stop for more than a moment to study the sets or décor or view a jump scare event.
My Top Favorite Events for this year were: 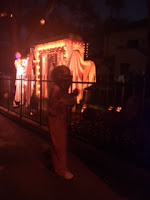 1.1       The Trick or Treat Scare Zone:   If you have seen this lovely homage to Halloween Horror this scare zone is immediately recognizable by the little Sam that wanders the zone. He is cute and disturbing.  The movie Trick or Treat is a horror anthology tied together by Sam.  Sam is a little fellow who punishes those who do not respect the spirit of Halloween.  He quietly observes all the mayhem associated with Halloween. The scare zone was wonderful not just because it was so true to the film but also because it was beautifully rendered.  Jack-O- Lanterns hung from trees.   Lights
turned the zone into a glowing orange Halloween extravaganza.

2.2      Dead Waters Haunted House:   This house was spectacular from the first moment you stepped into it.  The facade of a sinking 1800’s steam ship transported you back in time.  As you step into the ship, the ground shifts beneath your feet and the walk way remains crooked and slanted so you feel like you are in a sinking ship.  The décor and actors are a juxtaposition of decaying slave owners and voodoo monsters.  The horror is unrelenting and the jump scares are solid.  Voodoo rights add an extra bit of horror.  This house was meticulously crafted.  Every bit of scenery and décor added to a feeling of Louisiana horror.

33      American Horror Story:   I disagreed with most people on this one.  There were three seasons of American Horror Story represented in this haunted house.  There was Roanoke, Asylum, and Coven.  I loved this house because of the details from the series it carefully wove into each room.  It was like reliving these seasons.  I also loved it because it captured the horror from each of these seasons and the best parts of the seasons.

This was the 27th annual Halloween Horror Nights at Universal Studios.  Next year,  we are going to go on the R.I.P tours so we can see the houses without the crowds and the staff barking “move along” at us every time we stumbled or slowed down for a moment. 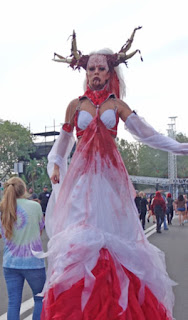 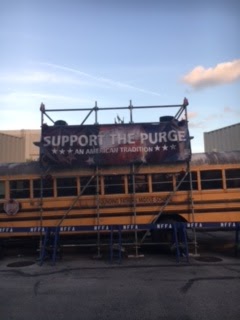 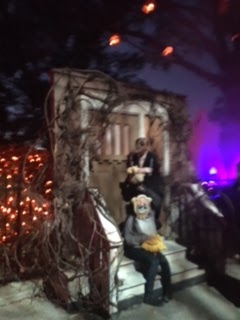 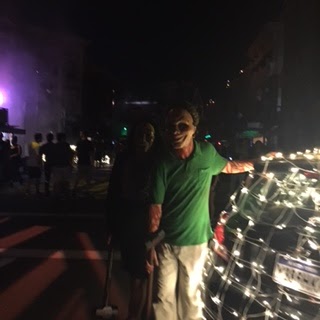 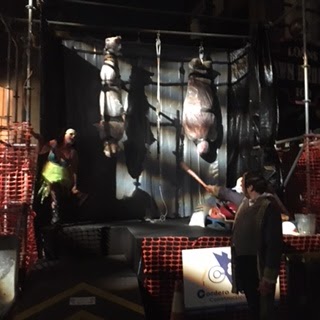 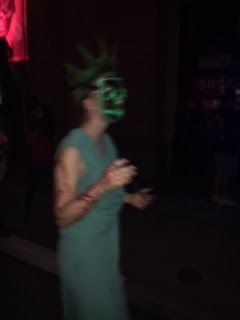 L. Shepherd said…
Wow, that sounds amazing. I love the Purge stuff. I'm a closet Purge fan, lol. I went several years ago, and they had filled the park with fog from fog machines and had zombies jumping out at people from the thick fog. Alice Cooper had designed some of the event, and it had a Walking Dead theme. I thought that was pretty kickass. The detail that you described is pretty amazing, though. I always love the attention to detail in theme parks.
October 16, 2017 at 9:43 AM

GST Courses said…
I am extremely impressed along with your writing abilities, Thanks for this great share.