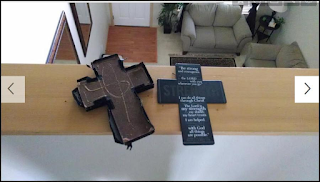 This story was sent to me by Keith Linder.  It is a chilling tale. If you would like to learn more about the paranormal investigation associated with this first hand account of hostile haunting you can read more about it at:
http://q13fox.com/2016/10/31/paranormal-researchers-return-to-look-into-haunted-bothell-home-again/
"I will always remember the events of this day.  It was the weekend Captain America the Winter Soldier came out. April 2014.

A month before this movie premier, I wanted to enjoy my cousin's spring break, she was a school teacher - 8th and 9th grade level.  She was aware of some of the problems we having prior to arriving.  I had kept her in the know about some of the events me and my girlfriend were experiencing.  One Bible having gone missing for over a year returned one night on fire.  Loud bangs, loud thuds, phantom footsteps, and yes a even a flying Amoire.   It was for those reasons, she bought a cross with her when she arrived. A gift. Something she wanted us to hang on the bedroom wall.  To protect us. Written on the cross were Bible, Joshua 1:9, Phil 4:13, Psalm 28:7 and Matthew 19:26; each verse spoke about maintaining one's strength, one's faith during troubling times.

The cross was prayed over and immediately hung in our bedroom. The bedroom at that time was the third most active place of the house; it's also the place where we sleep.  So, a cross positioned high upon the wall seemed a great idea.  This was March.  Mid March I believe.  April arrives.

A week or so before the Captain America movie came out, the cross went missing. Missing objects in our home are not new and not a big deal. Things get taken all the time. Sometimes they return; sometimes they don't. The items that do return are never found in their original spot. This cross would be no exception.

I woke up one morning, my girlfriend was beside me - I looked at the wall the cross was on and saw that it was gone.  I told my girlfriend almost immediately.

Other religious objects have been taken already, some broken, some turned to sit upside down, some relocated and some just outright stolen.   Whether one cross goes missing or twenty crosses go missing our reaction was always the same.  What the heck is going on?

The cross is gone. It's missing. My girlfriend and I had already given up on the notion of even looking for it. After all, it was a gift from my cousin, a spiritual gift at that.  No use looking for it, no one else lived with us, and objects get taken all the time. Whatever object we set out to look for, we never find.  This cross would be no exception.  My girlfriend and I talked about the cross being gone. I emailed my cousin the next day to tell her, she was shock.  The weekend arrives.

It's Saturday morning (movie day), and the cross is still missing. Like most Saturdays in my house, it was laundry day. I started doing my laundry early that day so I could go meet one of my friends for drinks.    Drinks and movie. That was the plan.

I began my first load of laundry: colored clothing. My girlfriend, Tina, is walking around the house doing her own thing. While my clothes are washing, I decide to go into my office and watch TV.  About an hour later, I noticed something peculiar. My first load of clothing was still washing. Now I know there are long wash cycles but this was weird - my brain knows how long it takes for my clothes to wash. So I'm in my office and I glance toward the wash room, hoping to hear the beep beep beep, the noise the washing machine makes when it's done. Clothes don't wash for an hour, especially my clothes, and especially a light load of clothing. So I glance at the wash room and sort of look at the clock on my PC toolbar , I think to myself what's taking my clothes so long to wash.

Now in my mind I'm thinking - that sound wasn't there before? All I put in the washing machine was clothing. Coins, chap stick, keys, etc. wouldn't make that noise. And even if it did, those sounds would have been heard almost immediately. At this point, the wash cycle had been running for  nearly over an hour. So why the loud noises now? Normally I would get up, walk to the washing machine and open it up to see what the commotion was about. Normally that's what I would have done.   It was very uncharacteristic of me to not stop what I was doing and investigate. Looking back and reliving the moment, it seems weird for me to not get up and investigate the noise, especially with the previous events having happened in this house. I acknowledged the noise, and length of time it was taking for that load to complete.  But nothing was motivating me to go see what was taking so long.

Minutes later, the washing machine beeped informing me that the load was complete.  I got up and went to the washing machine to transfer my clothes to the dryer. As I was pulling out clothes and tossing them into the dryer.  I immediately grabbed hold of something solid. Not clothing. Not shoes. Not anything except a metallic-wooden cross. I didn't know what it was until I pulled it out of the washing machine.  There in my hand in two pieces is the cross my cousin gave me.

Now some might say, "Well maybe the cross was in there to begin with." Not so. As I mentioned prior, the  would have been heard early on, especially during the spin cycle. The knocking noises I heard began 15 minutes before the washing was complete. When my machine is done it beeps. And also the washing machine was empty when I filled it with my clothing. Some might say, "Maybe you accidentally put the cross in the machine when you loaded in the clothes." Nope. It was a colored clothing load (machine wash COLD/WARM). I sorted my clothing carefully meaning items went into the machine almost one at a time. A cross this size was not going to be grabbed by mistake.  I'm talking about an eight-to ten inch cross. 8 inches long. 3 1/2 inches wide.  This wasn't a necklace.

Someone might also think might girlfriend put the cross in the machine. My girlfriend was nowhere near the washing machine that day, and I never left my office. The washroom sits right outside my office. And she wouldn't stop my wash load regardless. I do my own laundry, and she does hers.

I had to get those particulars out of the way because I realize people gravitate to the obvious explanation. And that is understandable but allow me to paint the picture near perfect as possible because it even hasn't began to get weird yet. In my hand is the cross my cousin gave me. It was wet and broken. I then called my girlfriend to the room. When she arrived, we both examined the cross from top to bottom. It had been taken the week before, about 5 days prior to turning up in the washing machine. I ended up fixing that cross. I put it back in it's original spot.  It would go missing a few more  times. It never appeared in the washing machine again.
A few weeks later 2 Bibles caught fire.  A month or so after the Bibles catching fire another Bible went missing.  It has never returned." 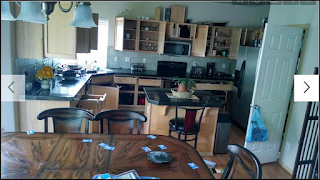