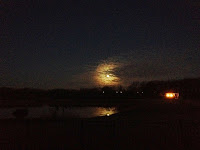 Lakeforest is a quiet neighborhood.  It is hidden away in one of those areas that used to be farmland and swamp.  It is off the beaten path.   The houses there vary is size and type.  The houses around the lake are million dollar mansions.  They are large and presumptuous.   They are the houses of people who want the world to know their wealth.   In other areas of the neighborhood, the houses are more middle class.  They are four bedroom, three bathroom American homes that are perfect for the average family.  The neighborhood is new and clean and typical and seems like the least likely place for a haunting.  The neighborhood is so young, it is hard to imagine any accumulation of sorrow that could create a ghost.

However,  tragedy and ghosts do lurk in the quiet history of this ordinary neighborhood.   The pool at Lakeforest is a crowded party during the long Alabama summers.  During the day, children fill the water.  The sounds of splashing and laughter drift up from the pool and linger in the air around it.  During the sticky, hot evenings and weekends the adults come out.  They sneak in beer and alcohol that is strictly forbidden by the pool rules.  The adults don't care.  It is all in good fun.   It was one such group of adults that begins this tale of ghostly woe.

One Saturday night, a group of  friends gathered around the pool, drinking and laughing and trying beat the heat. The night progressed and they decided to go back to the house.  They all loaded up in one truck.  People sat in the bed of the truck.  They knew they were drunk but it was such a short drive they thought they couldn't get into any trouble driving.  On the way home, the driver hit a bump.  In his tipsy state, he didn't realize what was coming.   When he hit the bump, one of the men in the back was thrown from the bed of the truck onto the driveway of a house he was passing.  The man died in that driveway while he was waiting for an ambulance.

The homeowners will never forget that night.  Finding a dying man in your driveway isn't something you forget.   They watched the man draw his last breaths and watched him be driven away.   It isn't just the memory that haunts them.  It is also the ghost of the man.   He lingers in the shadows of their home.  He makes odd noises and sometimes they can even catch a glimpse of him out of the corner of their eyes.   They aren't sure what he is waiting for.   Maybe he just doesn't know where else to go.
Email Post
Labels: Alabama Ghost Stories Alabama Hauntings Haunted Houses Neighborhood hauntings