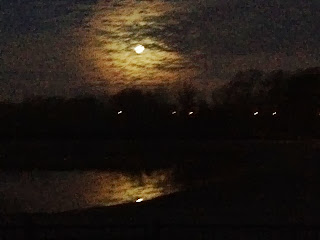 A coworker told me this story.  He has never been quite sure what to make of it, but it still bothers him.  A long time ago, he had a home in the rural portions of South Alabama.  The house was one of those old houses that groans complaintively at night as if it is protesting its age.   The sounds of old pipes and old wood fill the house and make it easy to ignore small noises and sounds that might be out of place in another house.

However, one night he saw something he couldn't ignore.  It was late at night and my coworker was in bed. His children and wife were out of town so the house was quiet.  Something woke him from his sleep and he opened his eyes to see a dark figure standing in the corner staring at him.  At first, he assumed the figure was of natural origins.  Being a proper Southerner, he reached for his gun to drive the intruder from his home.  Upon careful inspection, he knew the figure wasn't anything that could be driven away by a gun.  He blinked and pinched himself trying to make sure he wasn't trapped in some bad dream.  The figure remained.  Finally, the figure left.  He never told his family about the event.  He didn't want to scare them, but he'll never forget the shadowy figure that lived in the old house, deep in South Alabama.
Email Post

Anonymous said…
Ghosts are very real.. I know..one of the following stories, I can vouch for. And trust me, the experiences are not pleasant.. the other ones are also based on real incidents that happened in different parts of India: