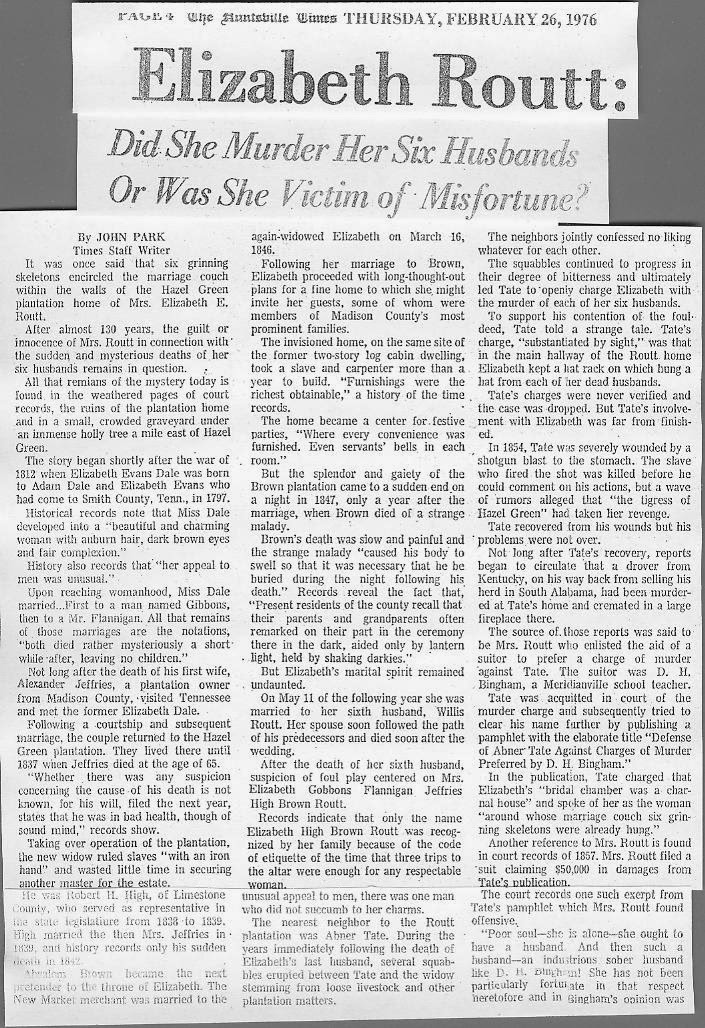 I have taken a little break from blogging this month, but an interesting news story inspired me today.  The news story can be found at http://www.waff.com/story/24544477/mystery-of-work-near-mysterious-grave-site-solved and discusses one of North Alabama's most interesting and notorious local ghost stories.  The ghost story is the tale of the mysterious black widow.   The black widow was a Hazel Green resident named Elizabeth Routt who managed to go through six  husbands in her lifetime.  According to local legend, none of her husbands met a natural death.  They all died at the hands of the beautiful Elizabeth Routt.  Elizabeth was originally named Elizabeth Dale and if the tales are true her home was built on an old Indian Burial Mound.  Her home was haunted by more than the ghosts of her husbands and those who whisper of the black widow haunting say that the ghosts that wander this area are many.

Those who talk of the grim remains of Routt's house and the grave sites where her ill fated husbands rest in peace speak of the area being wrapped in a shroud of darkness that chills you to the bones even on the warmest of days.  There isn't too much left to see of Routt's house and the grave sites aren't in the best of states, but I've heard that you know you've arrived at the graves because you can feel the presences of something dark in the air.   One local blogger described her son's experiences at the grave sites eloquently.  Katherine Boone describes the encounter on her blog http://okaylistenhere.blogspot.com/2010/10/dead-husbands-tell-no-tells.html.

"Time has ravaged the once pristine antebellum mansion. Locals believe the area to be haunted. My own son and his friend visited the site one night and came back shaken to the core. When asked what they’d seen, they replied their flashlight revealed glowing eyes 5 ft. off the ground and a dark mass which threatened to approach through the trees if they ventured closer. Imagine a 17 year old literally shaking all over as he told this horrifying tale. Something scared him, there was no mistaking that."

Elizabeth's true story remains a point of controversy as some still claim she was just unlucky in love, however, those who have experienced the ghosts of the black widow won't ever believe she was unlucky.  They claim she was a black widow who killed her all of her husbands.
Email Post
Labels: Elizabeth Routt Hazel Green Black Widow Huntsville Hauntings Southern Ghosts

Ceretha Miller Walker said…
I grew up in Hazel Green Alabama walking distants from 7 graves me and my friends used to hang out there every night just partying a lot and believe me it's haunted I know you can ask anybody that gtew up here and the 7 graves are still there I would love to own the land and fix up the graves
October 19, 2017 at 4:52 AM