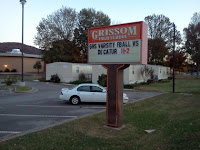 One of my ex high school classmates posted an interesting bit of news on Facebook this morning.  The news was that my high school may be relocated to a place off of Weatherly Drive in South Huntsville, Alabama that is currently the location of three Native American archaeological sites dating from 1200 BC to 1500 AD.   One of these sites is said to be the resting place of Native American remains.  This means they may be moving my old high school to a location on top of an ancient Indian Burial Ground.   So many images popped up in my head when I found out about this.   Old ghost stories crept up from the dusty corners of my mind, Buffy the Vampire Slayer's high school popped up,  and many other images.   I am thrilled.  This could be the making of a thousand ghost stories whispered by high school students down over the generations.

Stories of ghosts associated with Indian Burial Grounds have been pervasive in American folklore for generations. Indeed, where ever you find an Indian Burial site a ghost story is almost always close at hand. Some Native Americans buried their dead in large mounds.  These mounds have made for some interesting Native American Burial Ground ghost stories.  Indian Burial Mounds almost always have ghost stories associated with them.  One resident of Grandville, Michigan told a story of ghostly visitations nearby the Mounds there.  He described phantom noises and strange visitations.  In Alabama, Dauphin Island is known for its shell like burial mounds.   Phantom Native Americans have been seen in the shadows there.  Mounds aren't the only type of Native American Burial Sites that are haunted.  Robinson Woods in Chicago was known to once be the site of an Indian Burial Ground and stories of ghosts and paranormal activity abound in this area.  In Malone, New York there is an elementary school called Flanders Elementary.  It was built on top of a cemetery which was built on top of an Indian Burial ground.  Of course, the ghosts that wanders this school are legendary.   When I did research for my book, Haunted North Alabama, I discovered a paleo Indian graveyard might contribute to the hauntings associated with the Space and Rocket Center.  These stories are just the tip of the iceberg when it comes to Native American Burial Ground stories.  I could fill a book with these stories.

With the prolific nature of ghost stories associated with Native American Burial grounds, you would think that builders would avoid these sites for construction.  You'd think even skeptics would say it is probably bad business to build in a location that will inevitably be associated with stories of ghosts and horrors, but it doesn't ever seem to phase anyone.   I always wonder why people build on these sites just because it seems bad to destroy such ancient archaeological sites that surely hold unique pieces of American history.   Of course, none of these things phase those who decide where to build things.   So Virgil I. Grissom High School in Huntsville, Alabama could very well be the next of many places haunted by the ghosts of Native American Burial Grounds.  I wish I could send my children there.  I would love to hear the stories.

To read more about the relocation of Virgil I. Grissom High School:  http://blog.al.com/breaking/2013/01/huntsville_school_officials_do.html#incart_river_default

my web site - locating furniture To Buy when flipping
Also see my website > how to recondition furniture
January 17, 2013 at 9:50 PM

Anonymous said…
I grew up on Coronado Ave. in Bailey Cove estates, I always said their was something evil in the area!
February 15, 2021 at 8:10 PM