The Story of Jack O' Lantern 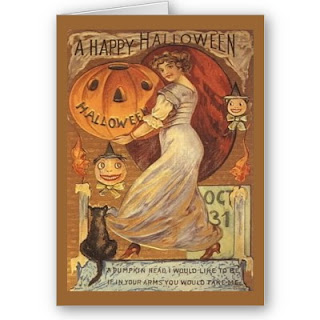 One of the most common Halloween traditions is the placing of a Jack O'Lantern on the front porch. On Halloween night, these grinning pumpkins illuminate the street with their devious grins. But where does this tradition come from?

The Irish brought the story of Jack O' Lantern with them from the old country. According to legend, Jack was a mischievous man who spent his time playing terrible tricks on all those around him. He knew his soul was in danger due to his terrible behavior, so he tricked the devil into climbing a tree and then surrounded the tree with crosses. The devil was trapped and Jack was able to give him an ultimatum, spend eternity in that tree or promise you will never take my soul. The devil promised he would ever take Jack's soul.

Time past and Jack spent his terrible life doing one bad thing after another. When he died, he went to heaven but St. Peter would not let him in. Jack was desolate, so he went to the devil, but the devil honored his promise and turned him away. Jack was left to wander the earth in darkness with only an ember he stole from hell to light his way. He hollowed out a turnip and placed the ember in the turnip. He became Jack O' Lantern who wasn't wanted by heaven or hell.

The Irish carved out turnips and beats every Halloween to scare away bad spirits like Jack O'Lantern and even gave the turnips his name. When they cam to America, they found pumpkins were much easier to carve than turnips and thus the modern Jack O' Lantern was born.
Email Post
Labels: Halloween History Jack O' Lantern Pumpkins

Little Gothic Horrors said…
I didn't know the tale of Jack and the devil either. Thanks for sharing, Jessica!
October 5, 2012 at 11:26 PM