Stumbling Upon a Haunted Pizza 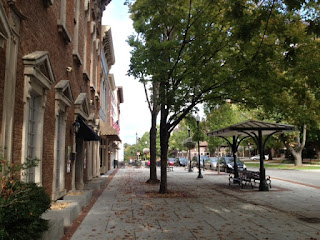 I have been meaning to go to Sam and Greg's Pizza in downtown Huntsville, Alabama for sometime.  It is notoriously haunted.  It has been investigated by paranormal investigators and proven to be haunted using all the ghost hunting gadgets such folk use.  It has been featured on the local news.  Psychics have declared it haunted. Yet, for some reason I haven't stopped by.  I even love pizza and their pizza is wonderful. 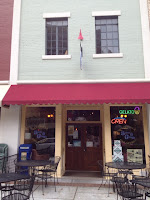 Last week a lovely young writer named Stephanie contacted me to do an interview for a local magazine. I was delighted when she invited me to meet with her at Sam and Greg's.  I assumed she knew it was haunted and invited me there because of its haunting, but it was just a wonderful coincidence.  I had heard that all of the paranormal activity associated with this cute little restaurant takes place in the upstairs room, so we sat upstairs.  I believe the activity actually happens in the forbidden region of the restaurant just beyond the lock door, but it was still nice to sit and talk about ghosts next to such a haunted place.

On my way out of the restaurant, I asked one of the employees about the stories associated with the restaurant.  She says that the rumors that circulate amongst the staff state that the ghost that haunts Sam and Greg's was once a maintenance man in the old building.  His boss used to like to play practical jokes on him and he was always being laughed at.  Nobody can say for sure if it was all the jokes, or if the maintenance man was just lost in all his melancholy, but, according to the oral tradition, he killed himself in the building on the second floor.  His ghost still wanders Sam and Greg's making mischief to this day.  The staff who talked to me about this says she's not sure she believes all this, but she still finds the story fun and so did I. 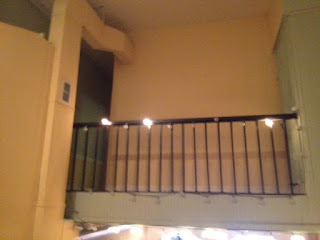 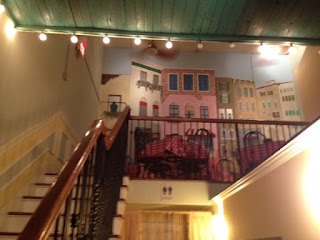 Little Gothic Horrors said…
Ghosts AND pizza! Now that sounds like fun!! The street in the top photo looks beautiful. What gorgeous architecture. Sam and Greg's Pizza looks very cute. I love the mural on the wall in the upstairs area. The ghost is a fab cherry on top!
October 10, 2012 at 2:54 PM