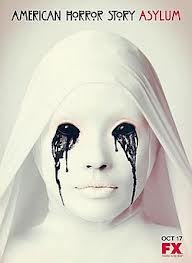 American Horror Story is one of my favorite television shows.  This is probably no surprise.  I have been waiting all year for the new season and it hasn't disappointed.  This year;s American Horror Story moves out of the haunted house and into the haunted asylum.  Haunted Asylums are my absolute favorite.  My own horror novel, Circe, is set in the haunted Searcy State Hospital in Southern Alabama.  As a psychologist, the hauntings that happen in such places of healing are particularly tragic and terrifying to me.

Interestingly, the asylum in American Horror Story reminds me of one of the best known haunted locations in this nation.  It bares a striking resemblance to Waverly Hills Sanatorium. Of course, Waverly Hills was never an asylum.  However, the hospital in American Horror story was once a tuberculosis hospital.   According to the first episode,  the asylum used to be a tuberculosis hospital where over  40,000 people died.  When it was a tuberculosis hospital, there was a tunnel beneath the hospital where the bodied were pulled out of the hospital for disposal.  They call it the death shoot. Waverly Hills also had a long tunnel beneath it.   In this tunnel, motorized carts were used to pull the bodies from the hospital to be disposed of outside of the hospital.  According to some rumors, as many as 100,000 people died in Waverly Hills.    Waverly Hills was opened in 1910 and is located outside of Louisville, Kentucky.  It has become a popular paranormal location and is considered by some to be the most haunted place in The United States.  I have to wonder if  the inspiration for this season's American Horror Story wasn't drawn from this amazing real life haunted location.

Julie Ferguson said…
I am so excited that American Horror Story is finally back and set in an asylum. It did not disappoint.
October 19, 2012 at 4:05 PM

Jelly Gamat Luxor said…
share words of motivation friend
People who think negatively always sees the difficulty in every opportunity, while successful people are always looking for an opportunity in every difficulty.
Greetings, success always and I wait behind the visit: D
October 19, 2012 at 8:58 PM

Unknown said…
It was super creepy. I like how it's set in present day and in the past. I have a feeling those two time periods will somehow collide...
October 19, 2012 at 11:14 PM

Katherine said…
I was thinking the same thing while watching The America Horror Story. I can't wait for next Weds.

I went to Waverly Hills a few years ago with a some friends. It takes a lot for me to be scared. While walking in I had the strangest feeling come over me, like someone was watching us. We were hoping to get to stay the night, but that was a no go.

Jessica Penot said…
Darkside.. I think the two times are going to collide too. I can't wait for when they do.

Katherine.... I would love to visit Waverly. It sounds like your experiences were amazing. You have made me want to go there even more.
October 21, 2012 at 12:56 PM

Sandra said…
I've yet to watch the series, but I will have to find time to get started. Sounds like something I would really like.
October 21, 2012 at 7:05 PM

Little Gothic Horrors said…
I haven't caught up with 'American Horror Story' yet, but I keep hearing good things about it. A haunted asylum sounds terrifying!
October 22, 2012 at 12:29 AM

Anonymous said…
I live in Louisville and waverly is definitely a place to travel to and visit! I have been here countless times and find something new every time I enter. Their Halloween haunted house is fun too!
October 29, 2012 at 3:56 AM

Jessica Penot said…
I definately need to visit. Thanks for telling me about it!
November 2, 2012 at 8:48 PM

zigoapex said…
I never had a paranormal experience
per say, but I worked on construction
remodeling the Farview state penitentiary, inWaymart,PA.
for the criminally insane.It was a creepy place, They had these weird paintings of clowns, flowers,etc... I guess to help keep the patients calm.
I worked there for months and never had anything happen until this one day, I was working in the basement, there was a long hallway
that had rooms to the one side.I was working in one of the rooms by myself, jack hammering a part of the floor to install new pipes,
out of nowhere, The hairs on the back of my neck stood up, and a chill ran up my spine, I threw the jack hammer down and spun around like a cat, but nothing was there.
It felt like someone was right behind me, it freaked me out.
Later in the week I was talking to a guard and he told that was the morgue I was working in.
I bet if they had someone do an investigation there, they would
have an eventful experiance.
November 7, 2012 at 7:59 PM

Randroid said…
I recorded a record inspired by and for the Waverly Sanitarium:
http://seplophobia.bandcamp.com/album/death-tunnel