The Tortured Spirit of Mary Kelly 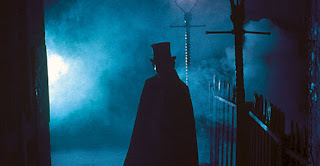 Jack the Ripper is probably the best known serial killer in history.  He is sometimes called the first serial killer.  Although this is not true, he certainly takes credit for being the first and the atrocities he committed shock us to this day.   One of his most gruesome murders, was the murder of Mary Kelly.  Mary Kelly was 25 years old when the ripper killed her and was well liked by all that knew her.  What he did to Ms. Kelly is so shocking it even bothers modern minds that have been desensitized by movies like Saw and Hostile and grown accustomed to the violence of serial killers. Photographs of Mary Kelly's body can be found easily via google, but I'm not one for shockingly violent photographs so I will use words. Warning:  The following description is disturbing. Here is the medical examiner's description of Mary Kelly's remains:

"The body was lying naked in the middle of the bed, the shoulders flat but the axis of the body inclined to the left side of the bed. The head was turned on the left cheek. The left arm was close to the body with the forearm flexed at a right angle and lying across the abdomen.

The right arm was slightly abducted from the body and rested on the mattress. The elbow was bent, the forearm supine with the fingers clenched. The legs were wide apart, the left thigh at right angles to the trunk and the right forming an obtuse angle with the pubes.

The whole of the surface of the abdomen and thighs was removed and the abdominal cavity emptied of its viscera. The breasts were cut off, the arms mutilated by several jagged wounds and the face hacked beyond recognition of the features. The tissues of the neck were severed all round down to the bone.

The viscera were found in various parts viz: the uterus and kidneys with one breast under the head, the other breast by the right foot, the liver between the feet, the intestines by the right side and the spleen by the left side of the body. The flaps removed from the abdomen and thighs were on a table.

The bed clothing at the right corner was saturated with blood, and on the floor beneath was a pool of blood covering about two feet square. The wall by the right side of the bed and in a line with the neck was marked by blood which had struck it in a number of separate splashes.

The face was gashed in all directions, the nose, cheeks, eyebrows, and ears being partly removed. The lips were blanched and cut by several incisions running obliquely down to the chin. There were also numerous cuts extending irregularly across all the features.

The neck was cut through the skin and other tissues right down to the vertebrae, the fifth and sixth being deeply notched. The skin cuts in the front of the neck showed distinct ecchymosis. The air passage was cut at the lower part of the larynx through the cricoid cartilage.

Both breasts were more or less removed by circular incisions, the muscle down to the ribs being attached to the breasts. The intercostals between the fourth, fifth, and sixth ribs were cut through and the contents of the thorax visible through the openings.

The skin and tissues of the abdomen from the costal arch to the pubes were removed in three large flaps. The right thigh was denuded in front to the bone, the flap of skin, including the external organs of generation, and part of the right buttock. The left thigh was stripped of skin fascia, and muscles as far as the knee.

The left calf showed a long gash through skin and tissues to the deep muscles and reaching from the knee to five inches above the ankle. Both arms and forearms had extensive jagged wounds.

The right thumb showed a small superficial incision about one inch long, with extravasation of blood in the skin, and there were several abrasions on the back of the hand moreover showing the same condition.

On opening the thorax it was found that the right lung was minimally adherent by old firm adhesions. The lower part of the lung was broken and torn away. The left lung was intact. It was adherent at the apex and there were a few adhesions over the side. In the substances of the lung there were several nodules of consolidation.

The pericardium was open below and the heart absent. In the abdominal cavity there was some partly digested food of fish and potatoes, and similar food was found in the remains of the stomach attached to the intestines."

Dr. George Bagster Phillips was also present at the scene, and gave the following testimony at the inquest:

"The mutilated remains of a female were lying two-thirds over towards the edge of the bedstead nearest the door. She had only her chemise on, or some underlinen garment. I am sure that the body had been removed subsequent to the injury which caused her death from that side of the bedstead that was nearest the wooden partition, because of the large quantity of blood under the bedstead and the saturated condition of the sheet and the palliasse at the corner nearest the partition.

The blood was produced by the severance of the carotid artery, which was the cause of death. The injury was inflicted while the deceased was lying at the right side of the bedstead." .. Taken from Casebook.org

It isn't surprising that Mary Kelly's spirit is restless.  Her ghost is still said to haunt White Chapel to this day. Residents in the flat that occupied the space where Mary Kelly's small room used to stand say that the room is haunted.  They say their pets won't go near the space where her body was found.  Kelly's ghost has been seen throughout White Chapel and there are those that have even claimed to have captured her spirit in photographs and video, although these claims do seem somewhat dubious.  Whatever the case, Mary Kelly was one of the most tragic of the ripper's victims.