The Origin of The Halloween Costume 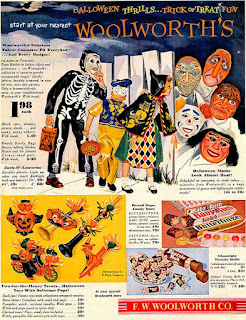 For those of us who passionately love Halloween, the season's preparations have already begun.  Part of every child and adult's preparation is deciding on a costume.  This is perhaps the most beloved part of any Halloween celebration.  Dressing up as a sexy maid or a horrible zombie is the Hallmark of our modern Holiday celebration. But as Halloween creeps up on us, I always think it is fun to think back to where this tradition came from. It is good to know why we dress up on Halloween. Halloween's history is most commonly traced back to the Celtic festival of Samhain. During Samhain, the Celts believed that the divider between this world and the next became thin. This thinning allowed both malevolent and benevolent spirits to cross over to our world. This naturally caused a good deal of fear and anxiety for the ancient Celts. While family ghosts were welcomed, bad spirits had to be scared off. Celts used bonfires to drive evil spirits off. They also used apotropaic devices to scare off bad spirits.

Costumes were used as both apotropaic devices and disguises to confuse the spirits. In Scotland, young men pretended to be dead by blackening their faces. These costumes evolved over the years and were eventually used in the late medieval practice of souling when poor people would go door to door asking for food. This practice eventually evolved into costumed trick or treating. So as you plan your costume this year remember that it should not only be interesting, but it should scare off evil spirits as well!
Email Post
Labels: Early Halloween Halloween Halloween Costumes Halloween Origins Halloween Traditions

Julie Ferguson said…
I did not know where the origin of the Halloween costume came from. It was interesting to read about it. I love the old castles and structures with gargoyles on them. I can see why the medieval people thought they would scare of demons because they are very creepy.
September 12, 2012 at 10:35 AM

Jessica Penot said…
I love the gargoyles too. I always try to keep one in front of my house to scare of bad spirits, also just because I think they are pretty!
September 13, 2012 at 7:54 AM

Little Gothic Horrors said…
Costumes for Halloween aren't the norm here, sadly, so I just stick with decorating my home with as many "apotropaic devices" as I can! :)
September 14, 2012 at 12:41 AM

Unknown said…
I was browsing for Halloween related blogs and I came by your post. Please allow me to pin some remarkable photos in here :D Thank you so much! I’m also sharing a post of the usual activities in our country, for some of you to know what is halloween in the Philippines .
Cheers and keep up writing nice posts !

IshTheLord said…
I love Halloween and love the history behind it as well. Love how its so dark but fascinating and always seems to scare people off and making them ignore the history of what they're celebrating.
October 27, 2013 at 9:03 PM

SSam said…
here are some great ghost stories for the Halloween season:

SSam said…
Here are some real scary stories for the Halloween season:

Unknown said…
Welcome to our 2013 Halloween costume contest!
The Haunted Knoll Awards are an annual Halloween costume contest, where you can submit pictures of your best costumes and win cash prizes, while helping a great cause!Entry is absolutely FREE, and for each of the first 1,000 entries, $5 will be donated to Kids In The Spotlight. That's right, by simply submitting your best costume photo, you can help raise thousands of dollars for Kids In The Spotlight, and further their commitment to train youth in foster care programs to create, write, cast, and star in their own short films.
The winners of each category will receive a cash prize! Entries are now open and will close November 7, 2013.
" Great costume! You should submit it to http://hauntedknoll.org”

Aenny said…
I love Halloween.I also love halloween costumes. I really like your post.Thanks for sharing.