Reader Story: Get Out of my Room 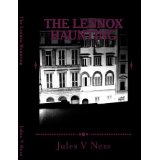 When I was twenty one years old, my new husband's family offered to sell us a house that had been in his family for generations at an incredibly cheap price. They had a difficult time keeping it rented and did not want to hassle with it anymore. We jumped at the opportunity and moved in almost immediately. It was only a matter of hours before strange things began to happen. It did not take me long to decide there was something or someone else other than us in that house.

Almost every night we would hear something coming up the staircase. The steps were old so you could hear every creak. Nick, my husband would jump up out of bed whenever he heard it to go make sure that someone hadn't broken in. It would always end the same, no one was there. The ghost appeared to get braver as time went on. We could hear the steps eventually come down the hall; they were getting a little closer to our bedroom door with each visit. Finally, the night came that we had both been dreading. Nick was sound asleep, exhausted from working hours of overtime. I heard the steps dare to pass the doorway of our bedroom and enter our room.

I felt slightly aware of something or someone approach the side of the bed I had my back turned to, but I was afraid to look. I just kept my face in Nick's chest and closed my eyes tightly. I felt as though there was someone right behind me, right behind my head just staring at me. I knew one thing for sure; I was not going to turn around to check. I just wanted to fall back to sleep as soon as possible.
My hand searched under the covers for Nick's hand. I very softly and quietly moved my hand beneath his big palm. I did not want to disturb him; I just knew it would make me feel better if his hand was lying on top of mine.

My back felt ice cold; I tried to bring the covers up tighter around my neck and back. That\'s when I felt it. Something moved briefly on the bed behind me. I did not acknowledge it. I forced myself to stay still as if I were still asleep. I felt that if I suddenly reacted, I would see something horrible, so I did not turn around, I did not move.

That seemed to upset whatever was behind me. I felt the bed move again, but just ever so slightly. I felt that whatever was behind me was so close to me it was almost touching my hair. I had the feeling on my scalp similar to when you have static electricity in your hair. I was sure it must almost be standing on end.
I rubbed Nick's palm with the back of my hand. I think I was actually trying to wake him, but trying to do it quietly, so whatever was behind me would not notice. It didn’t work. Nick just grunted a moment and then took another deep breath, he was still sound asleep.

I felt another movement on the bed directly behind me again. I actually could feel the blanket I had wrapped so tightly around me tug on me a bit as if someone had laid some weight on it behind me, I was sure that something was trying to get even closer to me. Suddenly I felt air blow on my cheek. It was just the same as if someone had breathed on me, except it was a lot colder, ice cold.
I tried rubbing Nick's hand again only I did it more aggressively this time. He moaned a little and turned to face me laying his arm across my side. That made me feel a little better, if there was someone or something directly behind me he would have struck them with his hand when he put his arm around me. I no sooner had the thought when Nick's arm went flying off of me and back towards him. It was as if someone had picked up his arm and flung it off of me. At that same exact moment, I felt a very strong tug on my hair, and heard a whisper in my ear.

"Get out of my room," the words struck me like a knife in my stomach.

It was a very raspy mean voice. I woke Nick instantly, but once again there was no one there. Many things happened in that house. We only lived there for thirty six days, thirty six days of pure mental hell.

That was when I started to believe in ghosts and spirit hauntings. It forever changed how I view things. I wrote a book about the whole experience, The Lennox Haunting... It is on Amazon, if you are interested in reading the first chapter. It is a true story, Jules
Email Post

Robin's Egg Bleu said…
This sounds oddly familiar to me. My husband's parents were anxious to rent us one of their homes, which at the time I felt was because they just didn't want to deal with cleaning it up for a new renter and of course we got stuck with that task.

However, much as I wanted to love that house, I HATED it. I dreaded being alone there at night. I always slept fitfully and was only comfortable in one room, where I spent all my time. There was something very negative about the place. My husband and my own moods became dark and bitter, we argued over the most petty of things, saw aspects of our personalities not before revealed.

I wanted to get out but he was afraid of hurting his parents feelings so we stayed much longer than we ever should have. Finally a car drove through the house in the middle of the night, rendering it temporarily uninhabitable.

It was our salvation and way out. Since getting out of there, our marriage is better than ever. And the house remains a rentable challenge.

I have since found that it was for many years a flop house, a meth lab and goodness knows what happened before that. Also used as an elder care facility so several people died there, but I don't feel that was the issue.

There was an enclosed deck the entire size of the backyard which covered up an empty swimming pool. I hated that deck, it gave me the creeps. Not sure that had anything to do with the negativity of the house, but I do know the entire back side of the house and property were very discomforting to me and I only spent my time in the front of the property. I know there's a negative entity in that house.
September 7, 2012 at 7:45 AM

Jessica Penot said…
Robin's Egg... That is a terrifying story. It is also very interesting. Can I do a post about this story?
September 7, 2012 at 8:26 AM

Unknown said…
Chilling story! Please add a link to your book on Amazon to the post. :-D

Julie Ferguson said…
Very creepy story. I don't know how they managed to stay in the house 36 days. I would have ran out of there sooner.
September 9, 2012 at 3:51 PM