Voodoo and Ghosts in Bayou Myth 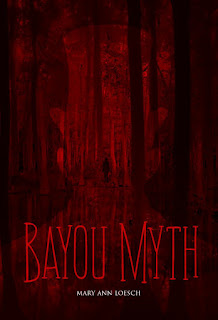 I don't do many book reviews here, so you know when I do a book review it is because it is particularly ghostly and because I really thought the book was interesting and worth reading.  Both of these things are true of  Mary Ann Loesch's Bayou Myth.  Bayou Myth is the story of a young woman, Joan, who is descended from the infamous voodoo queen Marie Laveau.  Our young heroine is not only descended from Marie Laveau, but she is haunted by her dead "grandmere's" ghost.  Marie Laveau knows her granddaughter is heir to her voodoo powers and is guiding her in their proper use.  The tragedy of it all is that the young Joan doesn't want these powers.  She just wants to be an ordinary girl.  I loved the haunting, voodoo elements of this book.  I also thought Ms. Loesch does a brilliant job of conveying Joan's voice.  The voice feels authentic and captures the reader immediately.  It pulls you into the mystery of the novel and makes you long for more. The only thing I felt was a weak about this book was the writing style not involved with Joan's voice.  Sometimes it lacked a certain poetry I enjoy in my novels.  However, Joan's voice and the story more than make up for this small weakness and I would definitely pick up this piece of haunting, voodoo literature before Halloween.  Below you'll find a post by Ms. Loesch describing her voodoo inspiration and an expert from the novel.  I hope you enjoy it as much as I did :).
The Voodoo of Bayou Myth
I have always been fascinated by other religions--especially the more "out there" ones. I was brought up Episcopalian which is basically just Diet Catholic--all of the sin, but no need for the confession! While my parents were pretty open minded, we didn't talk a lot about religion around the dinner table. It wasn't until I was in high school, about the same age as my heroine Joan from my young adult novel Bayou Myth that I even began to really think about religions outside my own.
I guess that's natural since the teenage years are when you start to question everything!
About that time I saw the movie, The Serpent and the Rainbow. It's basically about this scientist who travels to Haiti to learn about a man who died and then came back as a zombie. While he's there, he learns a lot about Haitian voodoo and goes a little crazy. Okay. I admit that it wasn't the greatest horror movie I'd ever seen, it did get me interested in voodoo. Everything I'd ever seen or read about voodoo had made me think it was just a crazy cult thing, but the movie indicated that the story of The Serpent and the Rainbow was based on true events.
Curious, I did some research and discovered that voodoo was much more than some spooky blood smeared rituals meant to frighten people. It's actually a blend of Haitian and Catholic beliefs. Yes, there are some elements that are supernaturally charged, (the creation of zombies is one example) but the intentions of voodoo--to love and be true to oneself--is essentially the same as other faiths.
Now, New Orleans voodoo does have a slightly different feel to it. That's because in Louisiana voodoo really is like a spicy pot of gumbo--it’s a blend of a little bit of everything! There, you have voodoo priestess who can make you love potions, create spells meant to get rid of an enemy, or make a gris gris bag to bring you good luck. This is the voodoo that Hollywood likes to show the world and  that's probably why it has such a confusing reputation.
When I set out to create a young adult tale that featured voodoo, I wanted to be respectful. So I did my best to include information about voodoo that is both authentic and a bit on the spooky side, too. But you can't write about New Orleans voodoo and not include one of the most famous voodoo priestess of all time either--Marie Laveau. Marie was the woman who really brought voodoo to the forefront of the New Orleans world. She is still revered--and a little bit feared--to this day!
So, of course I had to put her in Bayou Myth, too. In fact, she is the great, great, grandmother of my heroine, Joan Renault. She tends to guide Joan in the realm of voodoo, teaching her the customs and rites that will one day make Joan a powerful voodoo priestess. But like lots of teenagers, Joan isn't exactly willing to be bossed around by a lady who's been dead for almost two hundred years!
The really fun part of writing Bayou Myth was combining my research on voodoo with the Greek myths that so many of us are familiar with. You may recognize some Greek tales that now have just a little voodoo twist to them!
Hopefully, I've got you curious about my latest novel. Here's a teaser to wet your appetite a little more….
As a sixteen year old voodoo queen in the making, Joan Renault just wants to be like all the other girls in the small town of Monte Parish, Louisiana—obsessed with boys and swamped with social lives. If the other kids would quit calling her “hoodoo hag,” she might have a small shot at normality. It would also help if Joan’s weekend outings with her secret crush, Dave, weren’t always being interrupted by her dead Grandmere, the legendary Marie Laveau. After all, it’s hard to make out with your best friend when your grandmother is watching! But when you come from a long line of voodoo priestesses with dried gator heads decorating the wall of their huts, normal doesn’t come easily.


When Joan witnesses the brutal sacrifice of a child to a tree Druid, she learns her Grandmere’s scandalous past has come back to haunt those living in the present. Hera, a vengeful voodoo priestess, is determined to use the residual energy of Pandora’s Box to revive a sleeping voodoo god and declare war on the descendants of Marie Laveau, especially Joan. Suddenly, Greek myths are being re-enacted all over town, and Joan has her hands full trying to sort it all out. With the approach of Samedi’s Day—the voodoo day of resurrection—Joan must learn to accept her destiny in order to stop the approaching threat to her family and friends.

Mary Ann Loesch is an award winning fiction writer from Texas. Her urban fantasy, Nephilim, was published in July 2011 by Lyrical Press Inc.  An avid blogger for All Things Writing (http://www.allthingswriting.blogspot.com) and Loesch’s Muse (http://www.loeschsmuse.blogspot.com), Mary Ann has also contributed stories in the horror anthology, All Things Dark and Dastardly. Her latest book, Bayou Myth, was released in June 2012. While she loves dirty martinis and cuddling with her dachshund, she loves fan mail even more! Contact her through her website at www.maryannloesch.com.

A teenage girl stood in the hazy glow. Unlike the other spirits, her form held solid. I got the sense that she drew energy from the surrounding spirits. Her lowered head made it so I couldn’t see her face, but the style of dress she wore dated back at least a century. Not surprising, really. Monte Parish could trash its roots to the late 1700’s.


The ghost lifted her head. Her eyes were empty sockets and rotted flesh hung from her face revealing bone. She watched me, and the hatred pumping from her aura sucked my breath away. Her head moved as if she were looking at Dave. A sly smile formed on what remained of her lips, and the hatred crawling in the air multiplied. She moved towards us with an unsteady gait. The closer she got, the sicker to my stomach I felt.


She meant to harm Dave. But not because he’d done anything to her. It was because he belonged to me. Though she never said a word, her intentions spilt off her and my psychic conduit picked it up.


“What’s wrong?” Dave asked, but he complied with my request and closed up the tailgate.


The girl continued our direction. She raised a hand, and the sleeve of her dress slid back. Even from the distance we were at, the long white scar on her arm could be seen clearly in the moonlight. She pointed a finger at me.

Jeffery said…
Interesting Jess! Mills and Boon meets Mephistopheles ay! As you said Voodoo is a fascinating topic, it's basically Wicca in another guise. Every religion does seem to have a supernatural element attached to it though I s'pose even Orthodox ones. What is of real interest though and barely researched is the psychological side of it! Voodoo has one of the strongest reputations for causing people to give up their will to live seeing their fate as inevitable. Very similar to the Gypsy Evil eye syndrome.
Cheers!
August 18, 2012 at 8:46 AM