The Ghosts of Macknac Bridge 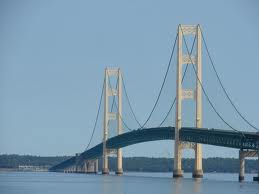 The Mackinac Bridge is always impressive.  Driving across the bridge makes it seem even more impressive.  Its length and height alone make it a daunting site.  Mackinac Bridge is five miles long and from cable to anchorages, it is the longest suspension bridge in the world.  The bridge connects the two tourist towns of Mackinaw City and St. Ignace and is crowded with travel, trailers, campers and cars.  It is filled with travelers on the road to their vacations or returning from them. The bridge was designed by Dr. David B. Steinman and opened to traffic on November 1, 1957,  The construction of this bridge was hazardous and fraught with danger as the Straights of Mackinac are known to be turbulent and treacherous.  However, the bridge was completed on time and now seres as the primary link between the upper and lower peninsulas of Michigan.

Mackinac Bridge is amazing.  Its graceful form stretches over the blue water with an eerie grace and it isn't surprising that the bridge has gathered a few ghost stories.  Driving over the bridge is a bit unsettling.  It is creepy know that there are miles between you and the nearest land and seeing nothing but blue water beneath you.   The ghost stories associated with this lovely bridge aren't that impressive.   They are certainly less impressive than the bridge itself.   Local lore states that a family once had a traffic accident on the bridge and a baby died in the collision.  Since that time, cries of babies have been heard on the bridge at night.   There are also many stories linking the bridge to multiple suicides.  Local legend says that the ghosts of those that ended their lives by leaping from the bridge still roam the bridge looking for the solace they could never find in life. 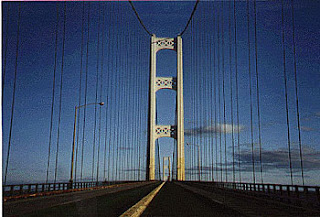 GhostlyGarden said…
I can't believe that bridge is 5 miles long! That is crazy! The longest bridge I have been on is the Second Severn Crossing which goes between England and Wales which is 3.19 miles long. We used to cross over the Severn Bridge (just under a mile long) when we went to visit my grandparents in Wales and then take the Second Severn Crossing on the way back just because my brothers and I wanted to go on the 'big bridge!' I used to think it went on forever as a child!

The story about the baby cries is a little lame, for one you probably won't hear it on account of the engine noise and the usual sounds of driving, unless the cries came from inside your car.. now that would be creepy! I'd imagine there would also be a lot more accidents if the ghosts of suiciders were roaming the bridge! I can imagine people swerving their cars to try to avoid them thinking they were real human beings!

Dorispinto1001 said…
Magical spells really work!! I never thought there were still honest, genuine, trustworthy and very powerful spell casters until i met the spiritual helper, MERUJA OWO. last week he did a love spell for me and it worked effectively and now he just casted another healing spell for my friend who has fibroid and family problem and now she is totally free and she is presently the happiest person on earth, she keeps thanking me all day..
I just thought it would be good to tell the whole world about his good work and how genuine he is, i wasn't thinking i could get any help because of my past experiences with other fake casters who could not bring my husband back to me and they all promised heaven and earth and all they are able to do is ask for more money all the time until i met with this man. he does all spells, Love spells, money spells, lottery spells e.t.c i wish i can save every one who is in those casters trap right now because i went though hell thinking and hoping they could help me.i recommend MERUJA OWO for any kind of help you want.
his email address is: nativedoctor101@live.com
if you want to ask me anything my e-mail is: dorispinto1001@gmail.com
Kind Regards!
July 7, 2012 at 12:43 PM


Heгe is my webpаge; nootropic ingredients
Feel free to surf my web site what is a nootropic
January 13, 2013 at 12:35 AM

merico said…
MY LIFE IS BACK, Am so happy to share this testimony on how Dr trust, was able to heal me from Herpes Disease, well i was detected positive on 23th may 2015, and ever since i have been looking for a way to treat and cure this disease from me, but all ways i try there was no solution, few weeks ago i saw a testimony of some people on how Dr trust,was able to cure them from Herpes disease, still on i heard about it on media when a young lady also gave her testimony about this same Dr, well left with no hope i message Dr trus, telling him all my problem, he told me what we were to do, that he was going to send me a portion which i am going to take, and after which i took this herb portion he sent to me, he told me to go back to the hospital for check up and after i have done that i should come and tell him the good news result, at first when i saw the message i was so shock and still did not believed i will be cured, well friend to make my story short i am HIV negative now after many time of sorrow, i am Negative, and my sickness are gone, i thank God for leading me to this man….you can email him on trustspellhome@gmail.com or spellsolutionhome@hotmail.com, call +1 (978) 390-5706 you can also call him , he can be of help to you on any problem like
{1} HIV/AIDS
{2CANCER
{3}HERPES
{4}DIABETES
(5}HERPERTITIS B
(6}HPV