The Ghost of Phillip Barton Key 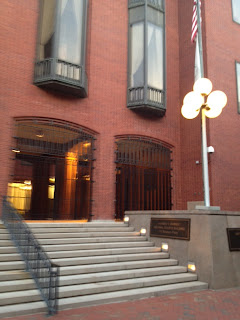 I have been traveling through Washington DC for the last few days.  DC is filled with more than a few ghost stories and the history here is as much a part of the landscape as it can be.   Last night, I went  on Washington Ghost Tours evening ghost walk with a young lady named Rachel.   I forgot the cable that connects my camera to my computer so I can't upload all of my photographs and do my  ghost walk review tonight, but I can tell one story Ms. Rachel told during the walk.
This sad story comes from Lafayette Square.   This portion of Washington DC is drenched in blood and the ghost stories here are as thick as the history.  One of the most interesting ghost stories from around the square is the story of Daniel Sickles and his beautiful bride, Theresa Sickles.  Daniel Sickles was an influential man in old Washington.   He was a New York Senator with unlimited ambition.  He loved Washington society and struggled to be the top dog in every arena of society and politics.  He even wanted to marry the most lovely bride.  He married his young wife when she was only fifteen years old and her beauty and charm made Sickles the envy of Washington.

Unfortunately, Theresa was a trophy bride that was quickly forgotten.  Sickles was chronically unfaithful to his beautiful wife.  He had numerous mistresses and affairs and even took one of his mistresses to meet Queen Victoria on a trip to London.  Theresa bore her husband's unending infidelities with as much grace as she could.  She might have born it indefinitely if it hadn't have been for the handsome son of  Francis Scott Key, Phillip Barton Key.  Phillip fell in love with Theresa and wooed her with great intensity.   Theresa fell in love with Key and the two had a passionate affair.

The affair was doomed from the beginning.  The lovers enjoyed each other's warmth and company for a mere hiccup in time.  Theresa was discovered by her cruel husband and she confessed everything to him.  Daniel was so angry when he discovered his wife's indiscretion, he forced her to write every detail of her affair down.  He took the confession and used it to ruin his wife's good name.   Yet, Daniel was still irate and he planned to further punish the two lovers.  He caught up with Phillip in front of Washington Gentleman's Club on Lafayette Square and shot Phillip dead.  The blood pooled on the ground and Phillip's ghost hasn't left since.    Some say that Phillip still wanders the park and area he was shot because he is searching for his lost love.  Other's say he wanders searching for the justice he never had in life.  Sickles was never brought to justice in life.  He was tried for his crime and he used the first temporary insanity plea in American history.  He was found innocent, driven mad by his wife's betrayal,.

Phillip Barton Key's ghost has been so active that he has become part of history.  The Gentleman's Club where he was shot was torn down and a home was built in its place.  The house was haunted and many fled the haunted building.  However, Lincoln's secretary of state, Seward, was too busy to worry about ghost stories.    Seward would become grateful for Phillip's ghost, however, after the night Lincoln was assassinated.   Many people plotted the assassination of Abraham Lincoln and some of the other conspirators were sent out to kill other key government officials.  Seward was meant to be assassinated by a young man by the name of Powell.   When Powell snuck in to murder Seward, however,  a loud, mysterious ban woke everyone and brought them to the hall.  Powell fled before he could harm Seward and many believe it was Phillip's ghost that drove him away with the mysterious bang.  Phillip's ghost has been seen throughout the square since that time.  It has also been seen in the courthouse where the gentlemen's club and Seward's home used to be.  We sat on the steps where Keywas shot as  we listened to Rachel tell her tale.  The photograph above is of the very place where Sickles was shot.
Email Post
Labels: Washington DC Ghosts Washington DC haunted places Washington DC Hauntings Washington Ghost Tours

Dr Blood said…
Lincoln was assassinated? I thought he killed vampires and stuff?
July 8, 2012 at 9:03 PM

Jessica Penot said…
Sandra... I am glad you enjoyed it!

Dr. Blood.... They actually had Abraham Lincoln Vampire Slayer in the book shop at the Ford Theater where Lincoln was killed.
July 9, 2012 at 2:08 PM

Julie Ferguson said…
I love touring historic places like that especially if they come with a great story and ghosts.
July 11, 2012 at 2:33 PM