The Island of the Dolls 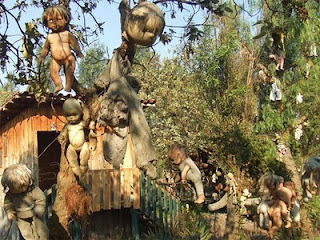 There is an island just South of Mexico City called Xochimico. Xochimico is famous for its beautiful gardens, scenic canals, and ancient history. Thousands of tourists travel through the canals of this beautiful island to gaze in wonder at the hanging gardens of Mexico. Hidden deep in these canals, far away from the normal tourist routes is a swamp with that is thick with scraggly trees that are all hung heavy with with the broken and shattered remains of an army of dolls.

According to travelocity, it is the creepiest place on earth. Although I have never seen this island, I tend to agree. Fifty years ago, a little girl drown in the extensive canals that innervate the small island. At the time the island was occupied by a man named Don Julián Santana Barrera. Shortly after the little girl drowned, Barrera found a doll in the swampy waters of the isolated island. A few days later, he found another doll. Several days later he found another doll. Berrera became convinced that the dolls were a sign from the netherworld. He believed that the dolls were vessels that had been sent to keep the little girl company and prevent evil from seeping out through the swamp. Berrera took this message seriously and began to collect dolls from all over and hang dolls from the trees.

Berrera died mysteriously some time later and from that point the mystery grew. Many people said that the dolls had come to life and killed Berrera. Others insisted they had seen the dolls wandering the island at night. Some believe that the dolls have come to life to replace Berrera as the island's keeper. Whatever the case, the pictures of this location are terrifying. It is an island hung with decaying, glass eyed dolls that stare out vacantly at those that pass by in boats.
Email Post

magikalseasons said…
Creepy, Creepy! My mom started a doll collection for me when i was young. Never liked them gave most of them away!
June 5, 2012 at 10:03 AM

Sandra said…
If i ever make it to Mexico City, I will definitely visit Xochimilco. Always looking to find a ghost. I just visited the Loretta Lynn Ranch last weekend, but alas, no ghost sighting, lol
June 5, 2012 at 3:15 PM

Little Gothic Horrors said…
I have a macabre fascination for this Island of Dolls and I'm really interested to learn more. I know it's creepy, but for me, it's a creepiness that draws me in rather than repels me. Great post, Jessica!
June 5, 2012 at 4:39 PM

Julie Ferguson said…
That island just gives me the creeps. I hope Destination Truth goes back there and does another investigation.
June 6, 2012 at 9:09 AM

Ghostly World said…
Wow...I really don't like dolls (not scared of them, just think they are creepy). I'd go to Waverly Hills Sanatorium before I'd go here.
September 2, 2012 at 4:22 PM