Ghosts from Around the Campfire 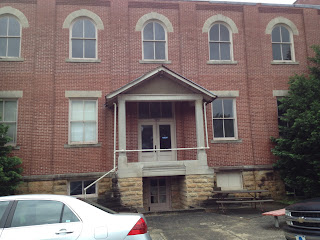 A  few days ago I did a post about St. Bernard's Preparatory School.  I had always heard that the school was haunted, but had never learned any specifics about the haunting.  My last post focused on photographs and relics, but today my son came back from St. Bernard's Summer Camp and he brought a variable cornucopia of ghost stories back with him as a little late Mother's Day present for his mom.   The camp counselor's at Camp Bernard's have collected and saved the folklore of the school and spread it to the campers as they settle into bed at night.  All of the camp counselors either are attending or have attended the boarding school so they know the ghosts that wander the halls of St. Bernard's School better than anyone.  Not only did the counselors tell tales, but the campers whispered of ghosts in the night and shared them with each other.

My favorite story is one a counselor told my son.  I have always heard it said that a phantom monk wanders the grounds of St. Bernard's in the night.  He drifts in the mist and comes with the fog.  According to Gabe's camp counselor, many years ago a monk became desperate with despair.  This monk hung himself in the library at St. Bernard's.  The ghost of this monk still wanders the library to this day.  The library is so haunted, the students once used it as a Halloween haunted house.  The counselor says that when he was alone in the library, he could almost feel the monk breathing on him.  It seems this monk is also the monk I had heard of before that wanders the grounds at night.

Other ghost stories flourished at the camp.  One story spoke of a little girl that leaped to her death from the top of the girl's dormitory.  The girl's ghost still lingers at the girl's dormitory watching the other girls as they sleep.  One story my son says is complete rubbish, but it made for good campfire fun so is worth telling.   This tale tells of a little boy who died in the boy's dormitory.  According to the rumors of the camp, this ghost is so hostile, he contributed to the death of a camper.

My son knows that the last story is nonsense, but campfire ghost stories are the heart of any good camp and the stories that have a hint of the truth in them add a little real creepiness to the fun of the stories that were nonsense and made camp all the more fun.   In the end,  stories like these remind me of my favorite thing about ghost stories.  They remind me of the joy of story telling and the joy of the last oral traditions and folklore.   I thank all the counselors and campers that spread these stories and keep them alive in the smoke of the campfire.
Email Post
Labels: Camp Ghost Stories Camp Ghosts Children's Ghost Stories Cullman Alabama Hauntings Haunted St. Bernard's Preparatory School St. Bernard's Ghosts

Sandra said…
can you imagine all of the great stories we don't know about because of oral traditions dying out.
June 17, 2012 at 9:37 AM

Little Gothic Horrors said…
All I kept thinking as I read this, is what a cool mother you are, sending your kid to ghost camp!
June 17, 2012 at 3:37 PM

Jessica Penot said…
Sandra... It makes me sad all the time to think of the death of oral traditions.

Little Gothic Horrors... Thanks so much! I try to be a cool mother, but sometimes I am a little like Louis from Malcome in the Middle with all my boys.
June 18, 2012 at 11:44 AM

Anonymous said…
I go to SBP and I dorm in the girls dormitory. I've heard so many ghost stories, and I kind of believe all of them. One is about how during camp one summer, a counselor in the girls' dorm woke up to a voice in the hallway on the top floor. She thought it was a camper, so she went out into the hallway and faced towards the bathroom, because the bathroom lights on both floors are always on, and she saw a little 'girl' standing there, and she told her to go to bed, but she saw it was a boy and she got freaked out and went back to her room. I have no idea if this story is true, but weird things have been happening in the dorms, apparently, but I believe it is my eyes playing tricks on me.

Another one happened just last year in the guys' dorms, and this is something I heard from one of the guy's friends, but the boys say the boys' dorm is in sections and not just a long hallway like the girls' dorm, so in one section there were three boys in three different rooms, but all in the same small section. One boy was tossing a paper ball into the trashcan and the trashcan moved. So he went to go tell one of the guys in the section, and while he was telling him what happened, the other boy was getting something from his shelf, and he looked at the first boy and then some nails or tacs that had been stuck on the bottom of the roof of the shelf fell down, so they went to the other guy's room and stayed there until study hall or something.

I'm not going to say these are all true, but I think the one about the monk hanging himself in the old library is true. That's where the drama club people host their plays, but its on the first floor. But there are supposedly locked off parts of the building and locked doors, and one door leading to the room where the monk hung himself has a cross either to the side or at the bottom of the door.

Sorry if that was confusing, and I'm pretty sure that its just loose apparitions. But I guess it could be true.
October 10, 2012 at 1:43 PM

Anonymous said…
But have you ever thought how much stress are you
providing your own loved ones. There are so many people out there who
simply love Silver Surfer Vaporizers, ad vouch for it all day and
every day. It is the latest and greatest in the new generation of herbal incense.

Anonymous said…
I go to sbp I have been in the girls bathroom in the library there is a cross in the closet of the girls bathroom. A monk hung himself there I didn’t know if it was true but a teacher of mine told me all about it. I believe that he haunts it
December 29, 2017 at 12:25 PM