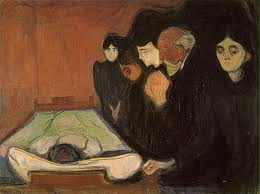 In one of my previous posts,  Robin's Egg Bleu of  http://robinseggbleu1.blogspot.com/ suggested that I do a post on the deathbed visions of ghosts and spirits that the terminally ill often report seeing.   The American Medical Society believes these visions are hallucinations and this is the typical scientific take on such visions.   However, many respected doctors and professionals have found holes in the scientific approach to these phenomena.   According to Volt, in the book Fringeology,  Dr. Kubler-Ross who was most famous for changing the way people looked at Death and Dying with her book On Death and Dying, was one of the first people to address deathbed visions.   In her work with the dying, she found that it was common for the dying to have visions of a bright white light and visions of spirits, ghosts, and the other side.  She found these visions so common and inexplicable that she dedicated much of the end of her life to exploring them.  She couldn't embrace the common belief that they were hallucinations because the patients were often brain dead when they had the hallucinations.
Other physicians have found similar things.   My husband once had an encounter with a man on the brink of death who had terrible visions of hell.   I've known people on the brink who saw angels and ghosts.  At the end of life, visions of the other side are common and remarkably similar.   Visits from deceased loved ones are common.   There have been cases of those on the brink of death being visited by loved ones and friends they thought were alive, but found out later were dead.  According to Steve Wagner of About.com, deathbed visions are very common.  He says, "Only about 10 percent of dying people are conscious shortly before their deaths. But of this 10 percent, it is estimated, between 50 and 60 percent of them experience these visions. The visions only seem to last about five minutes and are seen mostly by people who approach death gradually, such as those suffering from life-threatening injuries or terminal illnesses."

Regardless of people's beliefs prior to their deathbed vision, the visions are surprisingly similar.  It doesn't matter if you believe in ghosts, God, Allah, or nothing at all, on the path to death your visions will seem much like everyone else's.   All of this evidence suggests that at the moment of death, we are granted a brief glimpse of the other side.  Often, this vision can take the form of ghosts that come to guide you through the process of death.   The dying describe these ghosts as comforting.  They are there to help.  They are guides, friendly faces in a dark time.   Scientifically, these visions can never be confirmed as real, but as someone who believes in ghosts, it is hard for me to believe that the dying are seeing anything but the kind faces who have gone before them, guiding them home.
Email Post
Labels: death and the paranormal deathbed visions deathbed visions of ghosts dying and ghosts

Julie Ferguson said…
Interesting post. I like to think my Dad had family surrounding him when he finally passed.
April 11, 2012 at 10:50 AM

Jeffery said…
There's an analogy in Bohdi Yoga that relates consciousness as to being like light in an optical fibre,the interchange or exchange where those fibres meet the server is similar to our consciousness leaving our body once the connection is made. I like the idea of that to be honest. Given that conception and death are the only times a connection is made it's a fascinating idea.
Cheers Jess!
April 11, 2012 at 11:54 AM

Robin's Egg Bleu said…
Thanks so much for addressing this topic! My mother was terminally ill, and there were occasions within a week of her death where she had odd conversations, one with my father, who had predeceased her. It was like listening to her as though she were on the phone with him. She asked him if she could meet him now, he apparently told her 'no' as her response was "well, what time are you flying in?" (he was a pilot). "Okay honey, I'll be ready" she said.

She had other conversations with her childhood best friend who died of a brain tumor at age 20, various other family members who were also deceased.

The only disturbing 'vision' she apparently had was some 'woman' she didn't know who was apparently in the far corner of the room and my mom did NOT want to be left alone with her. Mom was genuinely frightened of her and I just didn't know how to handle it, how to comfort her without belittling her by not 'believing' her by telling her there was no one there.

Little Gothic Horrors said…
My husband, whose family is Italian, grew up with his grandparents living with him. He has vivid memories of when he was a child, listening to his terminally ill grandfather (who died at home) having conversations with deceased family members and friends in the days leading up to his death.
April 11, 2012 at 6:27 PM

Courtney Mroch said…
I think of them as angels. I know when my mom died, as she entered her Death Sleep, the energy in the room changed in a big way. I kept catching things out of the corner of my eye. I asked a nurse even when I could've swore someone was behind me and I got up to go in the hallway to see (thinking it was a nurse and I wanted to let them know it was okay to come in), but no one was there. The hall was empty. I mentioned it to one of the nurses and she said she hears loved ones having similar experiences a lot. She even mentioned that many in the medical community believe what you wrote, about how deathbed visions are some kind of hallucination among the dying. But many hospice workers don't see it that way. Not when both the living and dying see things. I believe maybe we have past loved ones coming to guide us along, or angels. Something was in the room. The same kind of energy, just more somber, than when I was in the delivery room when my friend had her baby. There are most definitely otherworldly beings amongst us, call them angels or what have you. Another great post, Jessica.
April 12, 2012 at 6:50 AM

Jessica Penot said…
Jeffrey... I don't know much about Bodhi Yoga. I'll have to look that up.

Robin's Egg...That end visitation was quite creepy. For some reason it sent chills up my spine. I'm glad she had the good visits to balance that one out.

Courtney... I like to think of them as angels too. Many of the children who have death visions say they are visited by angels. Maybe ghosts and angels both visit us as we are dying. I think the other side comes to guide us home in those last hours. The ghosts are the spirits are those who've been waiting for us and the angels are there to help us. Thanks Courtney.
April 12, 2012 at 7:40 AM

Jessica Penot said…
Emma.. How did I miss your comment. That is fascinating. It seems like many people have experiences with ghosts just prior to death.
April 12, 2012 at 7:54 AM

Lee said…
I'm going thru this right now with my mom, she is terminal. At night, her room takes on another feeling, she's a stroke patient, so she can't speak, but her eyes are wide open & staring at the ceiling like she's seeing something. I look up to see what she's looking at (sometimes she has a frightful look) and it's creeping me out, I don't see anything. I truly believe she is being visited by deceased loved one, perhaps my brother or dad. Her eyes are wide open in the dark & it scares me sometimes.
April 12, 2012 at 8:14 AM