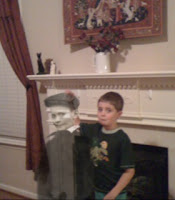 I have often heard it said that children are more in touch with the paranormal than adults.  Children are certainly more receptive to the idea of ghosts than adults and ghost stories can spread through a group of children like wildfire.   One could argue, that children are more open to the wanderings of imagination than adults and that they are prone to believe in many fictional things with a fiery passion.  They lack the skepticism that has grown in a more mature mind and they are prone to report encounters with the paranormal because of these factors.  Yet, my new baby has recently made me revisit the question of children and ghosts.

My little one spends a considerable amount of time staring at nothing and laughing and smiling.  He'll stare at a spot on the couch that is empty or a place behind my head where nothing is happening.   I have to ask myself, is it possible he sees things I don't see?  I found an interesting study on Ghoststudy.com that evaluated the very questions I have had.  The study was done by Nicole Leader who presented several surveys to parents of children of various ages in order to determine if children were in fact more receptive to the paranormal world than adults and if so, at what ages does this ability peak and fade.    The results of the study found that most parents did believe their children were more receptive to the paranormal and that children's encounters with ghosts usually began between the ages of six months and 4 years. Children seem to be naturally born with the ability to see and communicate with ghosts, according to this research.   The study also found that over time children cease to communicate with the other side. A few children maintain their abilities into adulthood, but this is rare. The researcher believes that this may be caused not only by a lessening of ability to communicate with the other side but also by parents steady discouragement of such communication.    The research also found that children most commonly have contact with the ghosts of deceased loved ones.  If you would like to read the entire study you can at http://ghoststudy.com/new8/studies/children.htm .

Another paper I read discussed a child psychologist who indicated that at least a third of his patients believe they see ghosts (Mark Hall via HubPages.com).  This paper focused more on the terror created by children's connection to the other side and ways to banish such terror.   If what it suggests were true, perhaps the reason children have a more profound fear of the dark is because they are more able to sense the unseeable spirits that lurk in the shadows.  As adults, we have shed our connections with the other side and have lost our fear of things we can no longer sense.

When I worked as a child therapist, I certainly found that children are sensitive to many things that adults have learned to tune out.  Children are deeply observant on a level adults are not.  They lack the inner dialogue that distract adults from being completely present in the now and that opens them up to observations adults, who are lost in their own thoughts, are not able to make.  For example,  if I saw eight children and their parents in one day, every child would notice and comment on my new tattoo while most adults would just focus on the business that had brought them into my office.   To me, this very trait in children would make them more open to encounters with the paranormal. 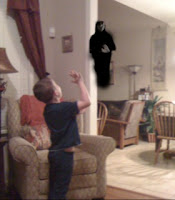 I'm not alone in this belief, any kind of review on the topic of children and ghosts seems to show a consensus that if ghosts are real, children see them more frequently and are more open to them than adults.  What does this mean?  It means that if your child is afraid of the dark or says there's a monster in the closet, maybe next time you shouldn't completely ignore them.  Maybe they are just seeing something you can't and hearing whispers you are unable to understand.
Email Post
Labels: Can Children See Ghosts children and ghosts children and spirits children and the paranormal children who see ghosts

Robin's Egg Bleu said…
Thanks so much for this post. I care for small children, and one at about 6 months, while I was rocking her, began to smile and coo, interacting with the empty hallway behind me. She was extraordinarily engaged with something, and it was simply blank walls to me. I got the instant and distinct feeling it was her grandfather, deceased for many years, popping in to visit her.

I work at the haunted Whaley House museum, and the first time I brought this same child there at age 2, she REFUSED to go inside the front door. I attempted again another time months later, and was simply driving by looking for parking (didn't tell her where we were going) and the second she saw the house she started crying and saying "No! No! Don't go there!" I realized she saw something there and it frightened her, she remembered it from the first visit and naturally didn't take her in.

Another odd occasion with her at the same age, I was discussing an old friend of mine with her mother, and couldn't recall my friends sister's name. Sophie came up to me and said "Ava". NO way she could ever have known this. But she did. I am positive that spirits are around our little ones, mostly good spirits and the children are very aware of them.
April 2, 2012 at 3:40 PM

Robin's Egg Bleu said…
I'd like for you to do a post (if you haven't already) on people who are terminally ill who see people we can't. The medical society claims they are hallucinations, but I've noticed in my experience that they always see people we can't who are deceased, not living. I have many questions about this.
April 2, 2012 at 3:43 PM

Jeffery said…
Fascinating subject Jess! And a good read too Thanks!
Pop the Parapsychology of Children into your search engine and have a read!..
Cheers!
April 2, 2012 at 9:16 PM

Jessica Penot said…
Robin's Egg Bleu... Thank you for the story. Could I use that in a future blog post about the Whaley House? Also,,, you are right, I should do a post on the terminally ill. I read an interesting book on the subject and have meant to blog about it for some time. You've inspired me. I will definately write about that sometime in the next few weeks!

Scared said…
A similar thing gets reported with cats and dogs. When we put kids and pets together, we get a group that is familiar and similar to adults, but not exactly the same. Maybe we expect their behavior to match ours too much. Another thing they share is the lack of good communication skills, so they can never tell us what they're looking at. If I stare off into space, I can explain myself, but a child usually can't and doesn't know the significance of doing so.
April 3, 2012 at 9:04 AM

Lisa Rogers said…
Great post Jessica! I definitely think children see more than we do. I deal with this subject quite a bit in my second book and my theory is that children believe in ghosts until they are taught not to.
My house is inhabited by several entities and my 1-year-old grandson interacts with them frequently. He loves to play in my bedroom and almost every time we leave the room, he will wave and say “bye bye” to the same empty corner.
April 3, 2012 at 9:10 AM

Jessica Penot said…
Scared... I've definately heard about animals and ghosts. The elderly and pregnant women also have some interesting paranormal experiences. Poor communication skills may be to be blame or over active imaginations, however older children are fairly good at communicating. My 9 year old son reads on an adult level and these days he's not alone. He's very able to tell me if he is staring at a bug in space or something he percieves as paranormal. Of course, his imagination is huge so the reliability of such reports would be drawn into question based on that.

Julie Ferguson said…
Interesting post. I believe children along with animals can see things we can't with our adult eyes. My dogs are constantly staring in rooms and then barking at nothing.
April 4, 2012 at 9:14 AM

Lisa Rogers said…
Sure Jessica--that would be great. As a matter of fact I've done a blog post about other experiences that involve my grandson and ghost. One such story will be used in the Llewellyn journal next month. If your interested in reading these post message me and I'll send you a link.
April 5, 2012 at 7:39 AM