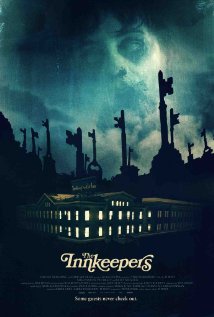 Last night I watched The Innkeepers on amazon prime.   I was excited.  I have noticed a new trend towards more classic ghost stories and haunting stories and have been really thrilled about several movies I have seen in trailers lately.   The Innkeepers is the story of two young hotel clerks who are left in charge with running a hotel on its last weekend before it shuts down.  The hotel is said to be haunted by a woman named Katherine O'Malley who hung herself after she was jilted by her fiance.   The two clerks are ghost enthusiasts.   They have tried to find ghosts in the hotel before and even have a website.  They decide to give it one last go before the hotel closes down because the hotel is almost completely empty.

The movie began very slowly.  There was a tremendous amount of character development.  Normally, I salute a steady ramping up of tension through character development and atmosphere.   This movie certainly tried to do this.  However,  the characters weren't overly interesting so I found myself getting a little bored by this in the Innkeepers.   It got so bad, I played scrabble on my phone after a while. When the ghosts finally started to appear, they were kept mostly in the shadows.   This was very well done.  After the slow start, the actual haunting portions of this film wasn't that bad.    Overall, The Innkeeper was an alright film.  It wasn't great, but I think I might have rated this movie lower than it might be to others because my expectations were so high.  I was really looking forward to this atmospheric ghost story.  Oh well,  I am going to see The Woman in Black tonight and maybe that one will bring a few more chills and I won't play scrabble through it.
Email Post
Labels: ghost movies movie reviews The Innkeepers Review

Courtney Mroch said…
I haven't heard great things about it. It looked good when I saw it advertised last year. It was supposed to be released in October. Then something happened and it was delayed. Then it went straight to DVD. Always a bad sign. Thanks to you conforming my hunch, I'll pass on this. I'm saving my time and mula for The Woman in Black. (Which I've seen early reviews on that unfortunately say it doesn't quite deliver what the trailer promises either. Bummer.)
February 3, 2012 at 1:11 PM

The Moonlit Stitch said…
Can't WAIT to see The Woman In Black! Have high hopes. Thanks for the review. The Others with Nicole Kidman was slow, but so worth it. ~*~Lisa
February 3, 2012 at 4:17 PM

Julie Ferguson said…
Sounds good to me. The Woman in Black looks very scary. Can't wait to read what you think of it.
February 4, 2012 at 9:42 AM