It was a good Christmas for me this last year.   I was under the weather, recovering from surgery, but my family filled my stocking with enough haunting books to keep my spirits up.  The first book I got was from my baby sister, Rose.   It is a collection of Japanese ghost stories by Lafcadio Hearn.    The book is absolutely beautiful, filled with Japanese depictions of ghosts and monsters from folklore in rare color.  Just flipping through the book is a visual journey into the dark world of Japanese folklore and it is a beautiful one.   The stories are very different from American ghost stories.  The book is called Kwaidan, which is translated as meaning ghost story. 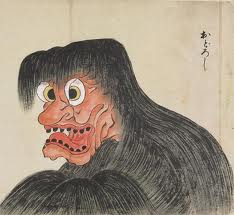 My favorite story was a story of a Rokuorkubi.  According to Wikipedia,  Rokourkubi "look like normal human being by day, but at night they gain the ability to stretch their necks to great lengths. They can also change their faces to those of terrifying oni to better scare mortals."   The depiction of Rokuorkubi in Hearn's book is an original translation and is different from Wikipedia's depiction and a little more terrifying.   The story in the book tells of a wandering priest who was once a Samurai.  He is sleeping in a forest known to be haunted by horrible ghosts and demons when a kind man comes upon him  He was taken in by the kind man and given a bed only to wake up in the middle of the night to find the bodies of the residents of the house lying on the floor in front o his room without a their heads.  At first, he assumes some dreadful spirit has killed everyone and taken their heads, but upon careful examination he discovers that the bodies are the bodies of Rokuro-Kubi.  The heads of the Rokuro-Kubi had separated from their bodies to do evil in the night.  The Samari hides the bodies from the heads and battles the Rokuro-Kubi only to have one of them attach itself to his sleeve.   He is almost executed because people assume the head is a souvenir he has taken of a someone he has slaughtered, but at the last minute a wise judge sees the markings on the neck of the Rokuo-Kubi and knows the demon for what it is.
This is just one of the tales gathered by Hearn who was a translator and scholar of Japanese folklore from the turn of the last century.  Although the book I was given was subtitled Japanese Ghost Stories,  I have seen the book in other places called, Kwaidan, Stories: Studies of  Strange Things. Other stories include tales of murdered birds that haunt the murderer and a young woman who makes her betrothed wait for her after death.  They are a beautiful glimpse into another world of death and I enjoyed them all.  This book was made into a Japanese film in 1965 which I am definitely going to try to see. 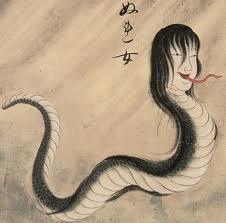 Jeffery said…
Myths and Legends of Japan by G.G Harrap 1917 is a very English translation of many of the best story's too Jess and well worth a read..Fascinating culture, I'm not surprised Wikipedia sanitize some of them given that some of them are based around sexuality..Glad you're feeling better!
Cheers!
January 4, 2012 at 3:18 PM

Jessica Penot said…
Thanks! It is good to be feeling better. I'll look up Harrap on Amazon. Japanese folklore is fascinating. They are masters of ghost stories.
January 4, 2012 at 3:24 PM

Zack Davisson said…
I found this post through Google Alerts. What edition of the Hearn book do you have? His work has gone into public domain, so there are numerous volumes. But they are all great.

If you are interested in Japanese folklore, I have a website where I translate traditional Japanese ghost and monster stories:

Julie Ferguson said…
It looks like the Japanese have some great spooky stories to tell.
January 5, 2012 at 9:02 AM

Morgan Webster said…
That was a really awesome story..One of my teachers told me the Japanese don't have ghost stories. He was wrong. I'm definitely going to check that book out. Keep the great stories coming.
January 5, 2012 at 12:20 PM

Zack Davisson said…
A teacher of what? That is an incredibly ignorant statement to make! Akin to saying something like "The French don't have love stories."

Morgan Webster said…
He was an idiot who thought he knew everything about the world lol he was also an economics teacher and my former boss..
January 5, 2012 at 1:53 PM

Zack Davisson said…
Yikes! I feel sorry for you!

Oh, and one thing about the story posted. Hearn, who didn't actually speak or read Japanese, very famously got the name of the Rokurokubi wrong. The story he wrote about was of a monster called a Nukekubi.
January 5, 2012 at 2:35 PM

Jessica Penot said…
Zack...I'm not sure the edition, but its title is a little different from the other editions of the book I've seen. It is called Kwaidan: Japanese Ghost Stories. I'll check out your website. It sounds fascinating.

Pam... Thanks.. I'm glad to be feeling better and I'm glad you enjoyed the story.

Morgan.. I've never heard anyone say the Japanese don't have ghost stories before. I thought the Japanese were known for them.
January 5, 2012 at 2:36 PM

Zack Davisson said…
Ah, I know that edition. That is the Dover book, which has the full unabridged text of the original 1904 publication, and the Yasumasa Fujita illustrations.

Jessica Penot said…
Zack... The illustrations are amazing in this edition. They don't always match the story, but they are beautiful.
January 5, 2012 at 3:50 PM

Zack Davisson said…
Are the pictures in color? Or black-and-white?

And those pictures you posted aren't from the book are they? I know at least that top picture is by Katsushika Hokusai.
January 5, 2012 at 4:11 PM

Jessica Penot said…
The pictures in my edition are in color. The pictures I posted were not in the book. I didn't want to violate any copywrite laws so I used pictures that were public domain on the internet.

Also,,, thanks for the comment on Hearn's error. Nukekubi is what they called the monster on Wikipedia, so Wikipedia was correct. I shouldn't have doubted them :)
January 6, 2012 at 7:39 AM