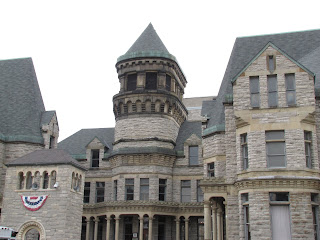 The Ohio State Reformatory is one of the most haunted places I have ever traveled to. It is considered to be one of the most haunted places in the nation. Even as you walk up to this old building, the cold seeps out of it and chills you to the bone. Inside the castle like structure, it was so cold I had to put my coat on. Outside it was lovely. This cold seems to come from more than the old stone. It seems to drift from the very core of the building where haunting and terrible histories clog the structure with sorrow and ghosts. 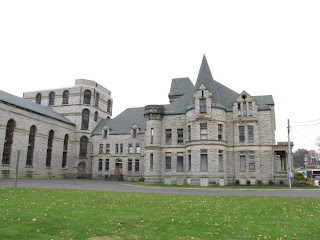 The Ohio State Reformatory is a thing of rare beauty. In the states, structures of such epic beauty are as uncommon as snow in the South. The reformatory was designed by architect Levi Tucker Scofield. His work was visionary. He had designed insane asylums and orphanages and penitentiaries all with the belief that beauty could bring peace to lost souls and help heal them. The original reformatory was build on progressive ideals. The philosophy was that by separating young men from hardened criminal and giving them the opportunity to grow while in prison they could become better people and would be less likely to continue in a life of crime upon their release. This idea actually worked for a time. Recidivism rates for those leaving reformatory were amazingly low. Almost 90% of those leaving never committed another crime. Later figures show recidivism as close to 60% returning to a life of crime, but when the Reformatory was built in 1896 it was a shinning ideal and a monument to the beauty of progressive philosophy.

As with many such things I have written about in the United States, these lovely turn of the century progressive ideals eroded with time. Finances became more important than people and The Ohio State Reformatory slowly became nothing more than a prison. Horror stories drifted out of the prison and became part of its mortar. Guards were murdered in solitary. One story told of a man who was put in solitary confinement with another man and killed him and hid him under the bed. Men were accidentally pushed over the five story cell block guard rail to their deaths. Men hung themselves. In 1933, overcrowding created more and more problems in the reformatory by 1986 The Council of Human dignity was in the process of completing a lawsuit to shut the reformatory down because of the “brutalizing and inhumane” conditions found in the walls of the once idealic reformatory. 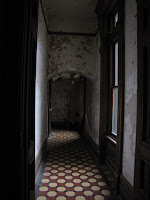 I can’t even begin to describe all the hauntings and horrors that have been seen in the Ohio State Reformatory here. I was in the reformatory for a brief period of time and I could feel the history seeping out of the walls. Those that work in the reformatory embrace its history and believe that the building is made more beautiful by it. It whispers secrets and calls to others to come explore them. The beauty and uniqueness of the structure has called to many since its closing. The Shawshank Redemption, Airforce One, Tango and Cash, and many other movies have been filmed there. People come from all over to tour the facility. Tours run daily. Famous ghost hunting teams from all the big televisions shows have locked themselves in the reformatory to see its ghosts and they are not disappointed. The ghosts in the reformatory are thick.

My guide said that paranormal occurrences are common in the reformatory in almost ever section of the structure. Objects fly about on their own. Doors open and close and lights flickers. Strange shadows creep up on you from quiet corners. The stories from the reformatory are numerous. A Guard named Frank Hanger was injured and later died during an escape attempt from solitary. It is said that his ghost and the ghosts of those hung for his murder still linger in solitary. Clear EVPs from this section of the prison have captured the voices of all these men. The Warden’s quarters where the warden and his family used to live is said to be haunted by the ghost of a warden and his wife who were both mortally injured in the warden’s quarters. One employee described seeing four phantoms walk straight towards her and then vanish in the warden‘s quarters. Another saw an orb moving in the shadows in the warden’s quarters. Full body apparitions have been seen in the administration wing, the wardens quarters, and the east cell block.. People have described being punched, pushed and hit. The list goes on and on. There are so many ghost stories that Sherri Brake was able to fill an entire book with stories just from The Ohio State Reformatory. I won’t try to tell them all here, but I will say that if you are ever in Ohio the reformatory is worth the visit. Its ghostly beauty will stay with me for a long time and its ghosts have made believers out of the most hardened skeptics. 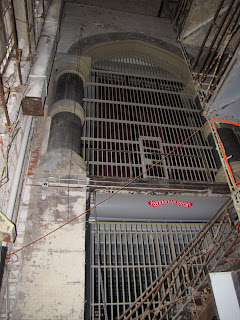 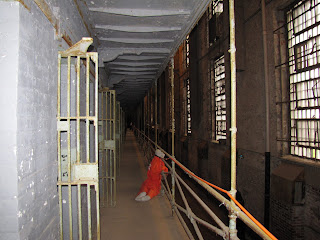 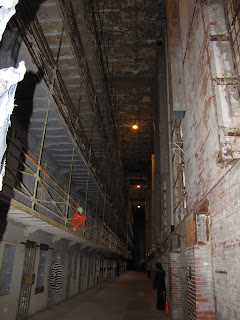 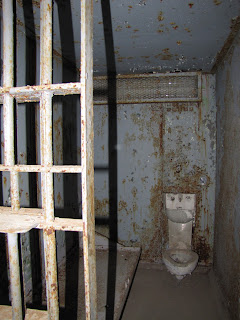 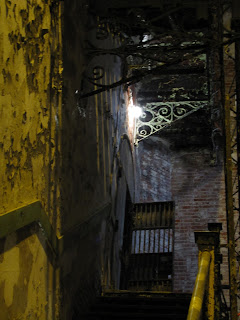 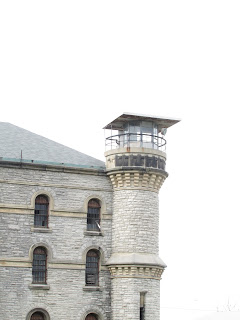 wicKED said…
Great pics and great story as always! Can you imagine exploring that place in the dark?
November 14, 2011 at 11:37 AM

Little Gothic Horrors said…
The Ohio State Reformatory is such a stunning piece of architecture. In another life it could have been a school, or a museum, surrounded by beautiful gardens. The interiors certainly match its bleak fate!

I love the philosophy of Levi Tucker Scofield. I always remember seeing an interview with Bette Midler, who was working on some sort of inner city beautification project, in which she was saying that the Victorians believed that people rose to match their surroundings if they were filled with beauty. I think beauty does uplift people and inspire them. Such a shame that they let the designer's vision die.
November 14, 2011 at 3:12 PM

Justine’s Halloween said…
I'm feeling further validated for not spending the night there! That place just looks haunted, and not in a friendly way. Still, I enjoyed looking through your photos. There's a beautiful decay in this building.
November 14, 2011 at 4:34 PM

Jeffery said…
Lovely photo's Jess! I hope they can find a new use for such a repository of the damned though. Museums and Archives such a perfect fit for such a beautiful building..Once archived human relics still linger..
Cheers!
November 14, 2011 at 9:39 PM

Jessica Penot said…
Wicked.. I think I would like to go in the dark.

Justine... The decay is beautiful and sad. I don't think I could spend the night there just because it is so cold. Even in the day I was freezing. I'm too much of a Southerner to handle those temperatures.

Jeffrey...I hope they can turn it into a Museum too. I think they are raising money to return it to its former glory. They need to be able to heat the building first, which is expensive so they are taking donations and working with what they have.
November 15, 2011 at 8:03 AM