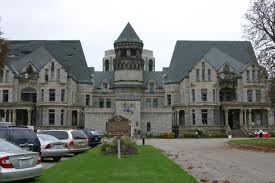 With Halloween behind me this week,  I'll be going on a unique trip to The Ohio State Reformatory.  I will join a group of people going on The Shawshank Trail and visiting many of the locations from one of my favorite movies, The Shawshank Redemption.   For me, The Ohio State Reformatory will be the highlight of my journey.  This century old Gothic structure houses a long history filled with sorrow.  I visited their website and this is the little bit of history I was able to gather from the site.

"The cornerstone laid on November 4, 1886 evolved into this magnificent Chateauesque structure. Cleveland architect Levi T. Scofield designed the Ohio State Reformatory using a combination of three architectural styles; Victorian Gothic, Richardsonian Romanesque and Queen Anne. This was done to encourage inmates back to a "rebirth" of their spiritual lives. The architecture itself inspired them to turn away from their sinful lifestyle, and toward repentance. This grand structure is comprised of more than 250,000 square feet and houses the world's largest free-standing steel cell block.  The Reformatory doors were opened to its first 150 young offenders in September 1896. After housing over 155,000 men in its lifetime, the doors to the prison closed December 31, 1990."

Since the closing of this beautiful building, stories of ghosts and hauntings have proliferated.   The administration wing is believed to be haunted by the ghosts of Helen and Warden Glattke.   Helen was Warden Glattke's wife and it is believed that she accidentally shot herself in the chest  in the administration wing.   Darker stories about her death say that Helen was shot by Glattke and he got away with it.   He died ten years later in the same building.   Regardless of whether or not Helen's death was accidental,  reports of Helen and her husband's ghosts have filled this portion of the prison.  Helen has been seen by visitors in her pink bathrobe and the scent of her perfume is said to linger in the corners and come with a cold breeze.

Other ghosts fill the old reformatory as well.  Helen and Warden Glattke are not alone.  The chapel is said to be one of the most haunted portions of the reformatory.  The chapel is believed to have once been an execution rooms and the ghosts of those who died in this now holy place have built up like dust in an old attic. Visitors have seen many spirits wandering this lonely room and photographs are filled with orbs and specters.

The entire reformatory is filled with ghost stories.   My hope is, that after I visit the prison,  I will be able to write posts about each section of the prison and the hauntings in these portions.   I hope I can learn more about each area's tragic history and maybe even feel a whisper of the things that haunt the reformatory.  I'll have more to do in Mansfield, Ohio and more to write about, so I'm hoping this will be an eventful week filled with stories and pictures from the The Shawshank Trail.
Email Post
Labels: Mansfield Ohio Ohio Hauntings The Ohio State Reformatory The Ohio State Reformatory Haunting The Shawshank Trail

Jeffery said…
Sounds like something interesting to me! I'm a fan of the Shawshank Redemption as well, great book! While you're in the area you should see if Tess Kincaid over at Willow Manor would be so kind as to tell you about her resident ghosts.
http://willowmanor.blogspot.com/

Lisa Rogers said…
Oooohhh I want to go. *cries softly into her pillow*

Julie Ferguson said…
Lucky you to be able to go there. I am looking forward to the pictures and stories.
November 2, 2011 at 1:12 PM

Justine’s Halloween said…
Hey! I have some friends who planned a trip there and asked if I would join them. Since the plan was to spend the night there, I said no way! I saw some photos of the interior of this place and it is beyond creepy there. Ghosts or no ghosts! The friends I mentioned were the guys dressed in Ghostbuster outfits on my blog. :) I guess they were planning a paranormal investigation there!

Limestone said…
Sounds like a very creepy place for me as you described the old building. Anyway, it's good to know haunted places around earth.
November 2, 2011 at 11:46 PM