Why We Wear Halloween Costumes 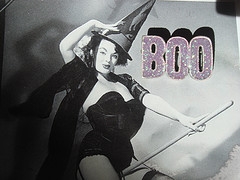 One of the most popular parts of Halloween is the costumes.  Dressing up as a sexy maid or a horrible zombie is the Hallmark of our modern Holiday celebration.  But as Halloween creeps up on us, I always think it is fun to think back to where this tradition came from.  It is good to know why we dress up on Halloween.  Halloween's history is most commonly traced back to the Celtic festival of Samhain. During Samhain, the Celts believed that the divider between this world and the next became thin. This thinning allowed both malevolent and benevolent spirits to cross over to our world. This naturally caused a good deal of fear and anxiety for the ancient Celts. While family ghosts were welcomed, bad spirits had to be scared off. Celts used bonfires to drive evil spirits off. They also used apotropaic devices to scare off bad spirits.

Costumes were used as both apotropaic devices and disguises to confuse the spirits. In Scotland, young men pretended to be dead by blackening their faces. These costumes evolved over the years and were eventually used in the late medieval practice of souling when poor people would go door to door asking for food. This practice eventually evolved into costumed trick or treating. So as you plan your costume this year remember that it should not only be interesting, but it should scare off evil spirits as well!
Email Post
Labels: Halloween Costumes Halloween History

Little Gothic Horrors said…
It's interesting the way the concept of scaring away the evil spirits by disguising oneself in costume, has evolved into the sexy maid or humorous parody costume. Personally, I always like the spooky costumes best. For me, that's what Halloween is all about.

I love gargoyles, too! Again, interesting how something designed to provoke fear can be so aesthetically pleasing! There's a little house, a couple of suburbs away from me, that is bedecked with gargoyles. It looks so incongruous in sun bleached Melbourne, but the delightful eccentricity of it, always makes me smile.
October 24, 2011 at 4:01 PM

Scared said…
I agree with Little Gothic Horrors about the costumes. A Halloween costume that isn't scary is kinda missing the point. Although that point (elaborated by Jessica) isn't quite relevant today, it gives you a reason to dress up at all. Maybe some people think sexy maids are scary, like the way clowns are scary.

Anyway, great post again, Jessica. I happen to have a story about monsters and Halloween costumes up today on my blog, too. It's called "The Impostor." Check it out: http://scarytruestory.blogspot.com/2011/10/impostor.html
October 24, 2011 at 9:29 PM

Justine’s Halloween said…
I wasn't familiar with the term "apotropaic devices" so thanks for sharing this info! Yeah, I guess some of us have come a long way from trying to scare the spirits. I think Halloween is an excuse for a lot of people to dress sexy. :) Do you have a scary costume planned for Halloween? And also for my Halloween blog party on the 27th. *hint hint* ;)
October 25, 2011 at 10:12 AM

Jessica Penot said…
I'm with ya'll. I think that scary costumes are the best. I do find sexy maids a little scary, but I would still rather be a zombie or some crazed killer.

Little Gothic Horror... It is amazing to me too how beautiful things designed to be terrifying can be. Gargoyles are lovely, but scary at the same time

Scared... Thanks for the link. I'm going to check it out now!