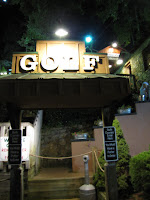 Tucked away in between a mini-golf course and a old cemetery there is  an old parking lot in the back of Gatlinburg, Tennessee.  This parking lot is very unremarkable.   Kudzu climbs down the walls of the embankment above the lot and covers all the parking signs.  Steep hills climb up in ever direction into thick folliage.  The best view from this lot is of the mini-golf course.  As you wander the lot, you can see children cheering and swinging thier clubs.

You would never know that this old piece of pavement used to be a pizza parlor.  It was the first pizza parlor in Gatlinburg. One night, the owners came into the pizza parlor and found that the restaurant was completely trashed.   Food was scattered about the floor, chairs were overturned.  Furniture was thrown in corners.   The owners called the police and things seemed normal for a while.  But the unknown vandals began to return on a regular basis.   The staff would frequently come in to find the place completely trashed.  Finally, the owners decided to put a camera in at night to catch the vandals in the act.   The vandals were caught, but they weren't the vandals the owners expected.  Video evidence showed objects moving on their own and things fliying about at night.

The owners tried to hide the video.  They were afraid word of the haunting would destroy business so they destroyed the tape.  Word of the haunting spread quickly despite the tape's absence, however.   Everyone knew about pizza parlor ghosts.  This actually only increased business.  People came from all over to eat with the ghosts.  Sadly, the pizza parlor was a popular place to eat, but the staff was less than happy to work there.    Those that worked there said that this old pizza parlor was tormented by ghosts.   Objects moved on their own.  Pizza's flew off the counter.   Chairs fell over.   The lights went on and off.  Odd noises filled dark corners at night.   No one wanted to work with the ghosts so the staff fled and no one would replace them.   The pizza parlor had to be shut down because no one would work there.

When the parlor was sold, it was sold to a company that turned it into a parking lot.  During construction,  bones from the cemetery beside the pizza parlor were unearthed beneath  the foundation of the old parlor.   The skeletal remains of dozens of people were exumed and buried elsewhere, but the problem still remained.  The first settlers of the regions didn't use proper gravestones.  Sometimes the only thing that marked the graves were jars of stones, so it is possible and probable that bones still may remain beneath the parking lot and the adjacent mini-golf course.  Local legend says that if touists park in this parking lot their cars will have flat tires, dings, and engine problems.   Tourists that play in the mini-golf course can't make the last hole or do worse than they usually would.   I know I've played mini-golf at this course many times and I will testify that I sucked every single time.  Damn ghosts. 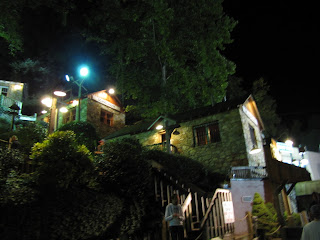 Chris 'Frog Queen' Davis said…
That was a great story....I think the lot next to my mini golf is haunted too! At least that is the story I am going to tell :D

wicKED said…
Awesome story! I never thought that I could blame my terrible slice on ghosts!
October 12, 2011 at 8:19 PM

Julie Ferguson said…
Fun story. I think it would be hard to work some place where the food and other objects fly around the room by themselves. You wouldn't get anything done.
October 13, 2011 at 9:41 AM

Jessica Penot said…
The Frog Queen.... I know almost every mini golf course I go to is haunted. Those ghosts are always ruining my game.

Wicked... I usually blame my terrible cooking on ghosts.

Read and Jeffrey.. Thanks!

Adsila... It would be tricky,, although it would still be easier than trying to cook dinner with children around.
October 13, 2011 at 12:27 PM

Little Gothic Horrors said…
I wonder if this story inspired the 'Poltergeist' movie?

I was thinking that at least the ghosts couldn't spit on any of the food, as they have no bodily fluids, but then ectoplasm occurred to me. I think a mini golf course is preferable to a food preparation area, for a haunting location. At least there are no hygiene issues to resolve.
October 13, 2011 at 4:50 PM