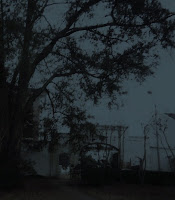 The first ghost story I ever wrote was about Searcy State Hospital in Mount Vernon, Alabama. When I was nothing more than a lowly graduate student, I did my internship there .I fell in love with it's history and it's white chipped walls. Everything about this old hospital spoke to me. Before I set foot on hospital grounds, my internship director, Dr. Kay Welsh, told our small group about Searcy's long and dark history. At the time, I was amazed that a place so steeped in history and tragedy could still be used as a psychiatric hospital.  It was even more remarkable because most of those who worked there and lived there every day were oblivious to it's history.  They seemed bored by the history and if you asked them about it, they seemed irritated that you would ever consider that relevant.

Searcy State Hospital is located in Mt. Vernon, Alabama. Prior to being a state hospital the old hospital has a long and dark history that is very difficult to find, but easy to see upon casual observation. The hospital is encased in long, chipped, white walls that seem as old as anything in the United States. From outside these walls, you can see a battered watchtower that gives testament to the fact that the hospital is in the same location as a 300 year old fort. The fort bears witness to American history. It was originally a French fort and then a Spanish Fort. It switched hands during the Louisiana Purchase and became a US fort. After the US took possession of the fort it was converted to a military arsenal and became known as the Mount Vernon Arsenal.

The Arsenal switched hands again several times and was taken by the Confederates during the civil war only to be passed back over the United States again in 1862. From 1887 to 1894, The Arsenal became a Barracks and was used as a prison for the captured Apache people. The most famous of the Apache people to be held in these barracks was Geronimo. There is a door in the lobby of the old hospital that is labeled as the door to Geronimo's cell.   It is beautiful and intricate.  Sadly, history notes that Geronimo was not kept in a cell during his stay at Mt. Vernon.   He was allowed freedom to wander the barrack, so the door is just a lovely bit of folklore.  The infamous Aaron Burr was also held at this secluded prison at some point after his notorious gun fight.


In 1900, the Barracks were transformed once again and the prison became a mental hospital. Searcy hospital was built as the African American mental hospital in Alabama. Conditions in the hospital were beyond questionable and at one time there were over 2000 patients in the crowded hospital and all were seen by one psychiatrist. All patients were expected to work in the fields.  After I wrote my first story about Searcy, I learned more about the tragedies that took place here.  I got numerous emails from family members of former patients asking if I had any access to records.  Apparently, many African American families had family members taken from them, institutionalized here, and they were never seen or heard from again.  I had an elderly lady write me asking if I could find out what happened to her mother.  It broke my heart that I could not.  She said her mother had been sane but had offended a white woman. The white woman had took her mother before a judge and no one ever heard from her again.  The elderly lady just wanted to know where her mother was buried.   Searcy was a place of unspeakable sorrow. 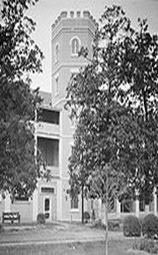 The hospital was desegregated in 1969, but it’s history is all around it.  Searcy to me tells the story of the tragedies in mental health.  Mental Health's history is a history of stigma and bigotry.  It is a history of trying to forget people who are inconvenient and do away with those who are embarrassing or different.  In the 1960's, under the leadership of Thomas Szaz, a well meaning group worked towards deinstitutionalization and undoing the tragedies of the period when people could be locked up and forgotten.  Unfortunately, this didn't work well.  Deinstitutionalization quickly became an excuse to do away with all inpatient care and those that needed it have struggled to find it as it has become the tale of modern mental health care.  Searcy was closed for good in 2012.  Now, I work in outpatient psychiatric care and every day I have to tell people that really need more care that there is none available for them without a good amount of money.  The pendulum has swung the other direction.

A year ago, a well meaning writer called me for what I think was meant to be a gotcha moment.  She wanted to know if ghost story writers and collectors ever thought about the impact our stories have on mental health care.  I had written a book about Searcy State hospital called "Circe" and she believed a was profiting from the mentally ill. She said that we made things worse for the mentally ill by linking them to ghost stories and horror movies.  I laughed and told her about my internship at Searcy.  I told her about the ghosts that haunted the old buildings.  I told her about the forgotten patients that had been buried there.   I told her that the ghost stories could only help all of us remember that some things should not be buried, locked up or forgotten and that maybe the ghosts that haunt these places are there to remind us that we need to take better care of the mentally ill and treat them like people.   They are there to remind us of all the living mentally ill that we try to forget, cut funding for, and who now end up in jail or homeless.   Sometimes ghosts stay for a reason and telling ghost stories can help us remember those that might otherwise be forgotten. 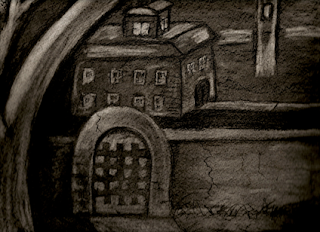 Pam Morris said…
sounds like it will be a fascinating read--good luck on the publication!
September 18, 2011 at 11:00 AM

Julie Ferguson said…
This sounds like it is going to be a great story to read. I got your novel and can't wait to sit down and read it. Thanks!
September 18, 2011 at 2:40 PM

Jeffery said…
Sounds Brilliant mate!
I remember reading about the Apache side of things years ago,apparently Geronimo s skull is in the hands of the infamous Skull and Bone Club at Yale University..Bastards!..I'm Looking forward to reading your Masterpiece one day,it all sounds fascinating simply because I love the history behind things.
Cheers!
September 18, 2011 at 6:03 PM

Andrea Allison said…
Sounds like a good read. You always remember the first one you write. Everything's a learning experience. I hope it finally gets published.
September 19, 2011 at 12:33 AM

Jessica Penot said…
Thanks All! I'm keeping my fingers crossed. The publisher says the end of next month so I'm hoping that is correct. I'll have more posts up when I have cover art etc.
September 19, 2011 at 8:22 AM

Justine’s Halloween said…
That land has quite a history! It sounds like there's certainly some potential for spiritual activity there. I have some paranormal investigator friends who would love to stay overnight there. They're always looking for hospitals and old jails to stay in!

magikalseasons said…
Oh I do hope it gets published! 13 is a perfect number for a dark novel & Fall is the best time to curl up for a great Haunting read! Keep us posted I am up for a good scare!
September 20, 2011 at 3:24 AM

Unknown said…
I used to be a patient at searcy and my family was attacked by these ghosts and i was attacked by these ghosts in the hostpital hearing esp and did not like my stay and in the hostpital on the third floor of the poundstone unit in a bathroom mirrors would have Indian faces in them. When i came from the hostpital my family started hearing them i hear the same insane girl.my brothers girlfreind one day took a picture of my room and sure enough it was the picture of the same little girl aperation.my brother took a picture of his room of what looked like the aperation of a gjinn since that objects would move and pictures would fly off the wall and break i hear the same screams screetchs.i was even scratched up as well as my dad and brother.
September 19, 2016 at 3:25 PM