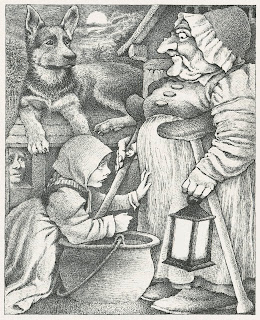 My favorite ghost stories blur the line between paranormal and folklore.  They have been told so many times for so long that the real history behind them has been lost and forgotten.  The ghost story lives on in an unprovable realm where you can't really verify all the facts behind the story as true.   People tell the story over an over again and it becomes part of the oral tradition of the area.  The story becomes legend.

The brothers Grimm collected stories like this.   They collected folklore and legends.  However, many of their stories have been cleansed of the paranormal, morbid, haunting, and ghostly for modern audiences.  My favorite Grimm stories are the ones that haven't been cleansed.  They're the ones that remain haunting and filled with ghosts and dark magic.   This is one of my favorite Grimm stories.   It is haunting and ghostly and tells an unforgettable story.


The Juniper Tree
Once there was a rich man who had a beautiful wife, but they couldn't have any children.  Everyday they prayed for a babe but none came.  Finally, one night the wife crept into the garden and into the shadow of the juniper tree.   There, she pricked her finger and spilled her blood into the snow beneath the tree.  She asked the tree to give her a son.  The tree gave her a son and his hair was red as blood and his skin was as white as snow.  Sadly,  the wife died a few days after his birth and the rich man was left alone with his boy.
The widower remarried in time and his new wife had a sweet little girl. The little girl's name was Marlinchen.   The woman doted on her Marlinchen, but was cruel to her step son.  She hated him with a rare fury.  One day Marlinchen wanted to save an apple for the boy and this made her mother even more furious.   The woman put the apple in an old trunk and told the boy to fetch it.   He leaned over to get the apple and the woman slammed the trunk shut cutting his head from his body.  She then blamed the "accident"   on Marlinchen  and forced her daughter to hide the boy's body by cutting him up and baking him into a stew for his father.
Marlinchen wept as she helped her mother and secretly stole away with his bones and gave the boy a proper burial beneath the jjuniper tree.   Soon after,  a phantom bird emerged from the boy's bone and went about the village singing:
"It was my mother who slaughtered me
It was my father who ate me
But sweet Marlinchen found my bones
And buried me beneath the Juniper Tree."
With his song, the phantom bird gathered objects from the village to help him and was able to drop them on his cruel step mother until she died beneath the juniper tree.  He was reborn from her blood and everyone lived happily ever after﻿
﻿
Email Post
Labels: Fairy Tales Folklore The Juniper Tree

Scared said…
Have you read "My Mother She Killed Me, My Father He Ate Me: Forty New Fairy Tales" edited by Bernheimer? It's a story collection from last year with some good writers doing new takes on fairy tales. Of course the title got me thinking of it.
July 30, 2011 at 7:54 PM

Jeffery said…
Nice!..Trees played a great role in Druidic culture, each with a part to play in the old world. You'll have to watch Jim Hensons Storyteller with the little ones. He really enjoyed bringing the Grimm tales to life.
July 30, 2011 at 8:02 PM

Jessica Penot said…
Scared...I'll have to look for that book. I love fairy tales and I love it when creative authors find new stories in old tales.

Lewis Powell IV said…
It's also interesting how violent these stories are. If you haven't read it, read the Grimm's tale, The Goose Girl. There are some cruel punishments at the end of that.
July 31, 2011 at 11:31 AM

Jessica Penot said…
Lewis... I have a lot of collections of original fairy tales. We clean them up so muc now for children, that we forget how horrible they were. At the end of the original snow white, the witch was placed in iron shoes from the fire and forced to dance until her feet burnt off. I think something is lost in the softening of the tales.
July 31, 2011 at 11:37 AM

BlueAnubis said…
There's also a movie by the same name staring Bjork as Marlinchen. They changed the story somewhat, of course. The movie is bizarre and surreal, but worth seeing if you like strange things.
August 8, 2011 at 7:34 AM

Anonymous said…
Great article! We are linking to this particularly
great content on our website. Keep up the great writing.
Here is my page ... Fast Loans
December 28, 2012 at 3:07 PM

Anonymous said…
I will immediately grasp your rss feed as I can not find your e-mail subscription link or e-newsletter service.
Do you have any? Please let me recognize so that I may just subscribe.
Thanks.
Feel free to surf my weblog same day loan
January 4, 2013 at 6:48 AM

Anonymous said…
Hey There. I found your blog using msn. This is an extremely well written
article. I will be sure to bookmark it and return to read
more of your useful information. Thanks for the post. I
will certainly comeback.
My website fastpaydayloans
January 4, 2013 at 10:38 AM

Anonymous said…
Good post however I was wondering if you could write a litte more on this
subject? I'd be very thankful if you could elaborate a little bit more. Bless you!
Also visit my blog ; Http://Playsters.Com
January 9, 2013 at 11:31 AM