The Kingdom: The Danish Miniseries From the Twilight Zone 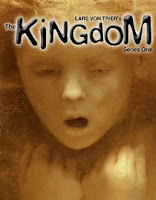 The Kingdom is a Danish mini-series that aired about seven years ago.   The show begins with a rather poetic introduction about a marshland riddled with the dead. Time has passed and a hospital as been built on the marshland.  It has become the epiphany of all things scientific and is filled with the most respected scientific minds in the field.  Maybe it is because of their hubris, or maybe because of their utter lack of faith in he spiritual, but the gateway between this world and the kingdom has begun to open again beneath the hospital that is most appropriately named,  The Kingdom.

This strange miniseries begins slowly introducing all the doctors and characters.   One o the characters is a ghost hunter who fakes new illnesses on a regular basis to be admitted to the hospital and chase the hospital's mysterious ghosts deeper and deeper into the dark core of the the kingdom.  The show features child ghosts, dog ghosts, phantom ambulances, zombies, evil neurosurgeons, and ghostly pregnancies.

Although The Kingdom is not a movie,  it is listed on 1001 Movies You Need to See Before You Die.  Steven King saw it and produced an American version called Kingdom Hospital that was set in Main.   This bizarre Danish film is a must see for anyone who loves the strange or the haunted and it is available on Netflix Stream.
Email Post
Labels: The Kingdom

Jeffery said…
Good call mate! The original with subtitles was terrifying, I honestly don't know how Stephen King managed to stuff up his version. Fancy making General Hospital with Ghosts!
June 14, 2011 at 6:19 PM

Scared said…
I got to see this series in a movie theater years ago and it was incredible! I'd forgotten all about it, but now I'll have to hunt it down and watch it again. Thanks for the reminder.
June 17, 2011 at 10:48 AM