The Lonely Ghosts of Fort Gains 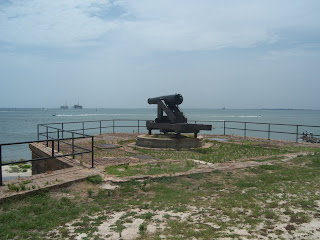 Everyone is writing about the civil war this week.  It is the 150th anniversary of the Civil War and I thought it would be appropriate to write something related.   Since I'm also planning my summer vacation,  I thought it would fun to write about one of my favorite vacation locations. Dauphin Island has long been one of my favorite haunts. It is a lonely, little island off the coast of Alabama that has beautiful, white beaches and great views of dolphins leaping just off the coast. It has been missed by much of the tourist trade that has made Pensacola and Gulf Shores unbearable for me. It is quiet and lovely.

Fort Gaines was of critical importance in the Civil War and the Confederates used it as a base for blockade running. Fort Gaines was also important in the Battle of Mobile. Union Army commanders, Admiral David Farragut and Major General Gordon Granger, came through the bay amid fourteen ships, with the orders to shut down the fort. The guns in Fort Gaines fired doing damage to the Union Army. Then, Admiral Farragut gave the notorious order, "Damn the torpedoes! Full steam ahead!" The Union army succeeded in its task when Fort Gaines surrendered to avoid hand-to-hand combat. Eighteen-hundred men died in the Battle of Mobile despite the surrender of the fort.

Fort Gaines is one of the most popular haunted sites in the nation. The ghosts of dead soldiers have been captures on film by tourists and paranormal investigators. All types of visitors have reported hearing mysterious footsteps, voices, and seeing ghosts. MTV will even feature it on it's haunted television special. I have been to Dauphin Island and Fort Gaines numerous times with my family and have never witnessed any of this activity. More than anything I have been haunted by the lonely beauty of the island that has been ravaged by history and nature. It remains one of my favorite places and I will face all manner of ghosts to wander the quiet shores of this island. 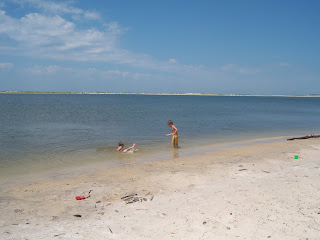 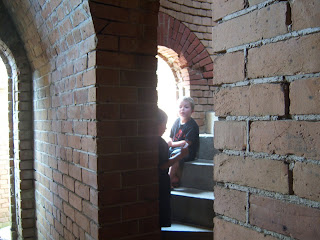 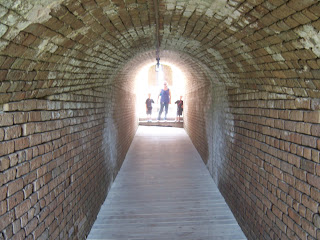 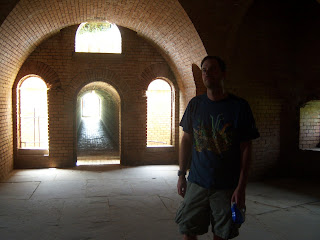 Tim Kent said…
I love Fort Gaines. Like you, I've never experienced anything out of the ordinary, but it looks like the type place that would harbor ghosts. Great blog, yours is my favorite to follow. Tim.
April 11, 2011 at 12:57 PM

Courtney Mroch said…
Oh wow! I do believe it's because of you that Dauphin Island is on my radar. I think I remember you talking about it before. And now? Just make it sound more enticing!
April 11, 2011 at 1:53 PM

Pale said…
Lovely photos. They really compliment your descriptions. Looks like a great vacation spot. There is a lot of haunted history in the beach town where we vacation as well. Which adds a bit of fun. :)
April 11, 2011 at 4:11 PM

Jessica Penot said…
Tim... Thank you so much!

Anonymous said…
sounds like a great spot. hope you catch some ghostly evidence this time around.
April 11, 2011 at 6:53 PM