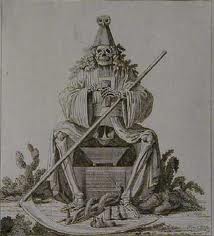 A. Lee. Martinez is my favorite author.  I have read his books backwards.  I read his last book first and crept my way back to Gil's All Fright Diner, which was his first novel.  This was an incredible read.  I finished it in a day.  It is interesting in the rules it creates and its descriptions of all things otherworldly.  Two of the heroes in the book are a ghostly rat terrier and a guardian ghost named Cathy.  Cathy is the last ghost to be buried in the cemetery and is thus cursed to watch over the cemetery until the next person is buried.  So the guardian ghost of any cemetery is always the last person to be buried there.

Whether he knew it or not, Martinez actually inverted a piece of old French folklore to create his guardian ghost.  In Breton, the Celtic Western tip of France, there is a old legend of L'Ankou.  L'Ankou was the oldest person buried in the cemetery.  He is the first ghost to rise up from the cemetery, and according to French Folklore, is thus condemned to guard over the cemetery and make sure all following souls are carried to the afterlife.   He is described as a skeletal figure in black robes with a wide rimmed Breton hat who uses a cart pulled by ghostly goats to carry the dead to the next world.   He is so prevalent in folklore that his depiction can be seen in many French Cemeteries carved into stone.  He is seen in the side of archways and in fountains.  Although, there are many of L'Ankou, they always look the same, skeletal and terrifying. My husband is French and he told me this story which was told to him by his family when he as a boy. 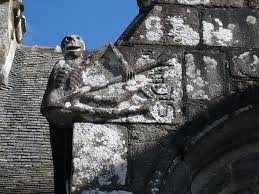 Wikipedia's take on L'Ankou varies a little from my husband's childhood memories of L'Ankou.  According to Wikipedia, L'Ankou becomes death's henchmen when he is the first buried in a cemetery.  In some tales, he is the first ghost to ever walk the earth and is the first child of Adam and Eve.  Accordng to French Wikipedia, he a derivation of the god Dagda.  Those who hear his cart will die shortly and those that see him will die within the year.  There is a legend that on Christmas Eve L'Ankou touches those who will die that year with his cape at Christmas Eve Mass.  Every depiction of L'Ankou I found shows him leading a cart drawn by horses rather than goats, but I suppose goats just aren't as scary as spectral horses. I prefer my husband's depiction of the goat cart.  It just rings a little more true to folklore and  is less dramatic to me.    L'Ankou is also known in Norman and Cornish Folklore as Anghau and Akow. 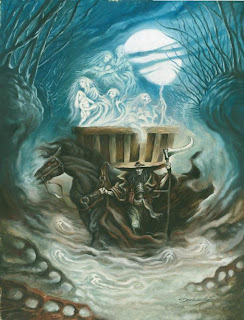 Jeffery said…
Folklore is a deep well to draw from isn't it,like you I enjoy the familiarity of it.Here's a link to a good Celtic/Druidic site you might find interesting.
http://www.sacredfire.net/
April 3, 2011 at 6:05 PM

Courtney Mroch said…
WOW! That is some super cool stuff. And I of course like your image selections. NEAT!
April 4, 2011 at 9:17 AM

Chris 'Frog Queen' Davis said…
Wow, something new to check out! Thanks so much. Looks fascinating.

Scared said…
I've never heard of this one before, but it's a great story. I like goats better than horses; they got the horns going for them and they'd be a little dissonant chord in that scene.
April 6, 2011 at 2:11 PM