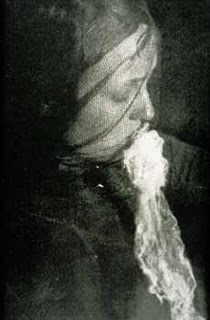 During the time contemporary to and following World War I, there was and explosion in what was then called spiritualism or mentalism. Spiritualism is a religious movement revolving around communicating with the dead via a medium. This explosion was brought on by the massive number of people that died in the war and of sickness during this time period. One of the more bizarre activities that became prevalent in this movement was the appearance  of ectoplasm. Ectoplasm is a term used to define a physical manifestation of the supernatural and it usually came out of the medium's nose, mouth, or ears. The term, defined by Charles Richet, meant spiritual energy externalized by psychics. It was for many years, used as absolute confirmation that the supernatural was tangible and provable.  It was supposed to be the physical remains of a ghostly presence.  Ghosts were there and they were real and the medium could prove it by showing ectoplasm.

What was discovered was both revolting and eye opening. Although many techniques and materials have been used by mediums to produce ectoplasm, the medium examined by this panel was found to be storing a sheep gut and fat mixture in a sack in her vagina which she expulsed at the appropriate time to make it appear as if she was expelling ectoplasm. Further research into other psychics revealed many other grotesque techniques for producing this fraudulent material. Some women learned how to regurgitate on demand and swallowed yards of muslin and cheese cloth which they would vomit on command. Others stored materials in their rectum.

Although this story is disgusting. It is more about the disgustingness that is possible within humanity when exploiting the needs of those suffering from the lost of a loved one than the vileness of the actual act. Although I love a good ghost story, it is always amazing to me how much more horrifying live people can be than ghosts.   Ghosts have never been shown to leave real ectoplasm, but it is amazing how many mediums were shown to be literally pulling it from there asses.
Email Post
Labels: ectplasm medium paranormal frauds Spiritualism

Pam Morris said…
don't remember you writing this but yucch! the ectoplasm thing reminded me of that movie "a haunting in connecticut" too. (jessica, I'm sure you know about this site but just in case--www.ghostsandstories.com --interesting and sort of fun!)
April 13, 2011 at 8:04 AM

Julie Ferguson said…
Many will believe what they are seeing is true even when it is blatantly obvious that it is fake. Ectoplasm is one of those phenomena that I didn't know much about, so thanks for the re-post. I like your last line where they are literally pulling the ectoplasm out of their ass, lol.
April 13, 2011 at 8:45 AM

Jessica Penot said…
Pam.. thanks for the link. I'm always learning new things and appreciate that. It is a great website.

Courtney Mroch said…
I didn't know if I was having deja vu or what. I remembered your title because I thought it was marvelous the first time around. Nice to see it again. ;)
April 13, 2011 at 11:36 AM

Robin's Egg Bleu said…
Oh...I don't know what I'd think about a medium who put me in a position to see something emerge from her vagina or rectum. The visual I am getting is threatening to create some vomitus reticulum and I hope I can prevent it from spewing from my mouth.

My God, how could people accept this? Disgusting. I thought ectoplasm was just some efflorescent mist in the air.
April 14, 2011 at 6:56 AM

Heart Centered Psychic said…
I have to say I find the worst part of this is the fact that psychics, mediums, spiritualist; whatever you choose to call it...would use trickery and dishonesty to play on the grieve and sense of loss from others.

Having been invited to read at a spiritualist community (although I'm a rarity, in that fact); I never saw anyone do anything like this. So sad!
Incidentally; I 'm not a spiritualist; just spiritual!

Everyone has their own opinion and will believe, as they want; as you mentioned. But this? In my opinion this is downright dishonesty and trickery.
April 19, 2011 at 8:44 AM

Tim Kent said…
Fact or Faked did a great remake of ectoplasm on one of their episodes. They used the same type camera and pulled it off perfectly.
May 17, 2011 at 10:15 AM

Carl Rosenberg said…
This article reminded me of Harlan Ellison's story, "Mom," about a young Jewish man whose mother dies and whose ghost comes back to haunt him. At one point, when the young man and his mother's ghost are talking, the mother threats to box his ears for his impudence, or something of the sort, and he says, "How? You're ectoplasm," and she replies, "Don't be disgusting."
August 24, 2018 at 8:54 PM