The Ghost of the Lynched

The Madison County Courthouse looks new.  It is the center of downtown Huntsville, Alabama and it is known for its interesting architecture and murals.  The structure that stands there today isn't more than forty years old.   Its uniquely modern architecture and style dates it, but it was not the first court house to stand in down town Huntsville.  Madison County dates back to the early 1800s and four courthouses have stood in the location where the current courthouse resides.  The County courthouse holds many ghosts, but the most famous ghost that still lingers in the courthouse is the ghost of Horace Maples. 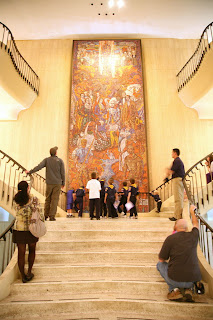 Horace Maples was lynched in front of the Madison County Courthouse in 1904.  He was a black man and the mob that lynched him was brutal and ruthless.   They beat him bloody and hung him from a tree.  They cut off his finger and in the night while he dangled, bleeding and helpless, he was shot three times.  The proceeding court cases and controversies made national news and I found numerous clips about the trials of those who were in the lynch mob in the New York Times.   Apparently, Madison County did not want to prosecute those that lynched poor Horace Maples.  Racism was deeply entrenched in Alabama culture and the locals didn't see it as a crime.   In order for the court case to carry on, the federal military and state militia had to be called in to keep the peace.  Nineteen members of the lynch mob were indicted for the killing of Horace Maples and this became a landmark case showing people throughout the South that lynching was a crime, no matter what the race of the victim.
Those who have stayed in the Madison County Courthouse lock up have described seeing men enter and leave through walls.  Ghostly figures have been seen throughout the courthouse accompanied by the usual strange noises, orbs, and odd lights.   It is hard to name all the ghosts that linger in the courthouse as many sad figures have passed in and out of its doors throughout its history, but Horace's ghost is the most frequently seen.   He forever lingers in the place of his tragic death. 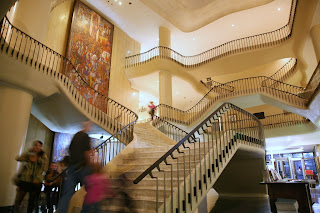 Chris 'Frog Queen' Davis said…
That just gave me shivers. Sad story, you want to think (believe) that these events happened longer ago in our history :(

Thanks for sharing. Love hearing these ghost stories!

Pale said…
What an awful tragedy. Beautiful architectural interior, though. The modern style still echoes the past, just like the haunting.
March 17, 2011 at 3:46 PM