The Haunting of Halcyon House 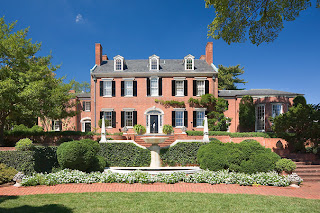 Halcyon House is one of the most prominent and historical houses in the Georgetown area.  It sits beside the Potomac with a quiet, historic beauty that invites ghost stories and its history doesn't disappoint.  Halcyon House was built by Benjamin Stoddert, the first secretary of the US Navy.   The house was well known by society and was said to serve as a social hub for the politicians of the time.    Stoddert died in 1818 and the house changed hands many times.  It eventually became a stop on the underground railroad.  Its basement was connected via underground tunnels to other stops along the railway and an untold number of slaves seeking freedom passed through the subterranean portions of the historic, Georgetown house.   Many slaves also died seeking their freedom in this house.  The trip through the underground railroad was perilous and many say that the slaves that died in Halcyon House still remain there.   Their ghosts still cry out for freedom from their subterranean lair.  The tunnels beneath the house have been walled up, but the ghosts remain.

In the 1930's, a man named Alber Adsit Clemens bought Halcyon house. Clemons was a cousin of Mark Twain and changed  Halcyon House drastically. Clemons was more than a little bit mad and he came to believe that as long as he kept building on the Halcyon House, he would never die.  He added rooms, doors to nowhere, pointless staircases, and useless halls.  He added new apartments, a crypt, and a coach house.  After Clemons died, the haunting activity increased.   Residents of Halcyon house since this time have described many ghostly encounters.  They have described being levitated above their beds at night, seeing phantom women, hearing strange noises, objects moving on their own, and seeing the ghost of Benjamin Stoddert and Alber Clemens.

Halcyon House is currently owned by a sculpture who has put a great deal of time and effort into restoring Halcyon House and making it  beautiful.   He has had the house on the market for several years now and the beginning asking price for this beautiful building was 30 million.   The price has dropped.  Halcyon House was for sale for 19.5 million in April of 2010.   Although the house is for sale, it is far from empty.  The current owners still rent it out as a venue for special events and parties and is a common location for weddings so ghost stories still drift out of the house like a steady fog.  The ghost stories are so many they can't all be listed.  Phantom cries are a common noise in the old house as are the sounds of objects moving.   John Alexander wrote a book on the haunts of Washington D.C. and in it he said that Halcyon House was the most haunted house in Washington D.C.
Email Post
Labels: Georgetown Hauntings Halcyon House Haunted Houses Washington D.C. Ghosts

Pale said…
Ooooh. Very interesting. I used to work at an ad agency in Georgetown and I adored the neighborhood (what's not to love?) But come to think of it, aside from the stairs in the last scene of The Exorcist, I never heard much about the local "color" ;). But now that you mention it, where there is a lot of history, there are always ghost stories.

Chris 'Frog Queen' Davis said…
Wow, sounds like a cool place....let me go see if I have 20 milliion in my piggy bank! :D

Pam Morris said…
wow...I lived in the D.C area for about seven years and I never heard of that place being haunted and suchlike...wish I had known about it then. very cool story.
January 24, 2011 at 5:10 PM

Jessica Penot said…
Palemother and Pam.... lucky you living near Georgetown and DC. I'm going to have to look up some more DC ghost stories because this one and the Exorcist stairs ghosts are the only ones I know.

Anonymous said…
I don't even know how I ended up here, but I thought this post was good. I don't know who you are but definitely you're going to a famous blogger if you aren't already ;) Cheers!
My web page: insomnia cures for children
January 22, 2013 at 7:44 PM