The Cemetery in the Snow 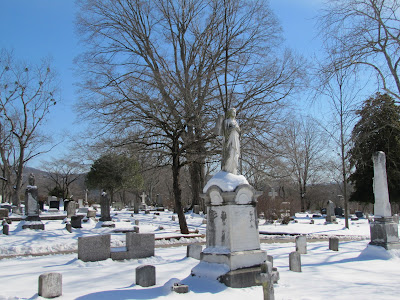 It rarely snows in the South.  It snows so rarely that all of life seems to freeze when the first snow flake hits the ground.  School stops, work stops, the stores are quiet.  The snow casts a strange silence in the South and I couldn't help but wonder what the cemetery would look like draped in quiet white.   So I went to Huntsville's most famous cemetery to take pictures and explore a little in the snow.  Maple Hill Cemetery is the oldest and largest cemetery in Alabama.  It was begun on two acres of land and those acres were sold to the city for 200 dollars.  The cemetery has grown to over a hundred acres.  Its oldest grave stone is from1812 and it is of a little girl. Like many cemeteries, Maple Hill Cemetery boasts many ghosts.  Its long history and many stories stretch as far as the imagination. Ghosts and stories hide behind the tombstones like shadows waiting to spring out.

The most famous ghost said to live in the cemetery is Sally Carter.  She is Huntsville, Alabama's most famous ghost and she is best  known for haunting the carter mansion.   After her grave was moved away from the carter mansion, her ghost has also been seen in Maple Hill cemetery where her grave now resides.  Sally Carter was an unfortunate young woman  who died of an unexpected illness while staying at the mansion.  Her ghost has been seen numerous times at the mansion and at the cemetery.
One of the crypts at Maple Hill Cemetery is also home to the ghost of an elderly lady.  Her body rests in one of the large above ground crypts in the cemetery.  According to legend,  in life the woman loved sitting on the front porch in her rocking chair.  She loved it so much her beloved chair was placed in the crypt with her after she died.  People say that if you push your ear up to the door of the crypt you can hear her chair gently rocking inside the crypt.  I tried this and heard nothing but the wind, but the story is wonderful none the less. 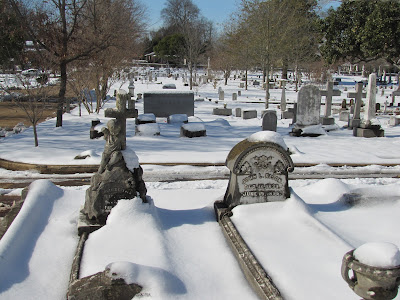 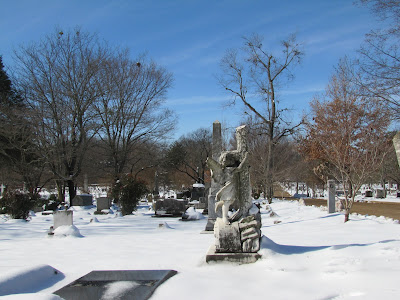 Sharon Day said…
I always thought cemeteries in the autumn were beautiful and even in the winter when the trees are bare, but in snow--gorgeous! That is really atmospheric.
January 16, 2011 at 6:36 PM

Lewis Powell IV said…
What lovely pictures! I've been in Atlanta taking pics this weekend and with the snow at times it wasn't hard to imagine I was in New England and not in the "Deep South."

The woman in the rocking chair story is interesting. There's a similar story about a crypt at Memory Hill Cemetery in Milledgeville, GA and I believe I've heard similar stories from other cemeteries as well. It's interesting how these stories are so similar.
January 17, 2011 at 12:44 AM

Robin's Egg Bleu said…
These images are gorgeous and peaceful, as if they are all covered by a soft white blanket.
January 17, 2011 at 10:55 AM

Courtney Mroch said…
GORGEOUS photos, Jessica! What a pretty cemetery and great article idea. Funny. I have this one I wanted to write about cemeteries in unexpected places and was tempted to go take pics of the 3rd cemetery I want to include in the post when the snow was on the ground. But then I got lazy and stayed inside instead rather than brave the cold. However, this makes me wish I'd gone. Who knows what neat shots I might've gotten! (Although, you have such a good eye. I've now taken to studying your photos for ideas on perspective and such. ;)
January 17, 2011 at 2:17 PM

Anonymous said…
wow, i wish i would have taken photos of one of the cemeteries near my son's school. if we get any more snow, that's the first thing i'll do.
January 17, 2011 at 6:37 PM