The Cathedral of Learning 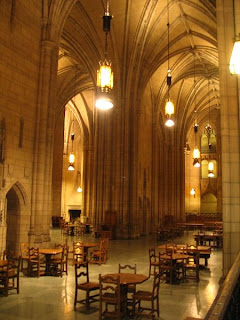 Last year I went to Pittsburgh, Pennsylvania for a writer's conference.  While I was there,  I met a young writer who had a passion for ghosts and ghost stories.  She was working on a young adult novel about a ghost hunter.   I was lucky enough to  have her give me a tour of her home town, where she had gone to school.   The first place the young woman took me was an amazing building called the Cathedral of Learning.   The Cathedral of Learning is the second tallest educational building in the world.  It towers above the landscape around it casting a long elegant shadow over the rest of the University of  Pittsburgh.  The architecture is all Gothic revival style so as you step into this tall building, you feel like you are stepping into a medieval Cathedral.   It is truly a Cathedral of Learning.

The Cathedral of Learning was begun in 1926 by Chancellor Bowman and community contributions helped him realize his dream.  The 42 story building contains classrooms, libraries, and a common room.   The most famous rooms in the cathedral are the nationality rooms.  These are a series of rooms on the second floor that have been decorated with historic pieces from numerous cultures so that each room looks like a room from the culture it represents.  According to my guide, it was one of these rooms that was haunted.

The Early American room  looks the part.  It is filled with historic pieces and has been decorated to look like it stepped out of time.   It is a shadowy room that feels haunted.   It isn't just the decor.   Many visitors to the Early American room have described having paranormal experiences.  The stories began 30 years ago, after  a woman donated several of her grandmother's items for the space.   The items had belonged to Martha Jane Poe, a relative of Edgar Allen Poe.  Many of the paranormal events described in the room seem to revolve around Martha Jane's wedding quilt.  One janitor described finding hand prints on the quilt when he was alone there at night.   Other visitors have seen doors open and close on their own and seen objects shift on their own. The baby cradle has been seen to rock when the room is empty and visitors that have spent the night in the room have reported feeling a cold spot.

According to Gretchen McKay of the Pittsburgh Post Gazette,  there are innumerable reports of ghostly activity in this old room and it may be that Martha Jane's ghost still stays with her things.  I didn't have any ghostly experiences in the Cathedral of Learning, but the building's decor certainly gives the building a chilling feel.  I know I would hate to be in the Early America Room alone after dark. 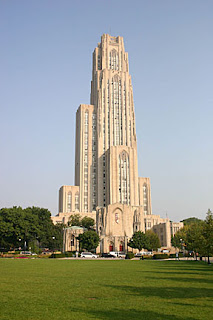 Chris 'Frog Queen' Davis said…
Wow, I looked this place up and I definitely want to check this out one day. And the room does sound mysteries and intriguing. Thanks for sharing.

Anonymous said…
Wow, I had never heard of this place. Definitely sounds like a place I'd like to visit.
btw, i found the two books, Ghostopolis and The Dead Path. can't wait to start reading them. thx.
January 5, 2011 at 8:43 AM

Courtney Mroch said…
Oh nice! Again, I love the pics. And if I'm ever in Pittsburgh I'll check out this little gem of a haunted place. Thanks for sharing.
January 5, 2011 at 1:26 PM

Jessica Penot said…
Marbella... I'm so glad you got them.. I hope you enjoy them as much as I did.

Heart Centered Psychic said…
Odd. My comment from this morning has not appeared. Regardless; Lovely blog, lovely photo; and the fact I'm sure you encouraged a young, upcoming writer who took you your around town? The most lovely thing of all!
January 5, 2011 at 3:44 PM

Jessica Penot said…
Brenda... you are so nice. She did as much encouraging as I did. I'm sure she'll make the best seller list while I'm still writing my little ghost story books.
January 5, 2011 at 7:52 PM

Lewis Powell IV said…
Marvelous article! Haunted Times did a write up of the cathedral sometime last year, I think, though your article is better. Keep up the good work!
January 6, 2011 at 11:04 PM

Robin's Egg Bleu said…
Wow, what a cool place to visit! Glad I found your site, I used to be head docent at one of America's most haunted houses in southern California. I had so many experiences there, it's an amazing place. I love reading about the experiences of others! Have a fabulous New Year!
Take Care,
Robin
January 7, 2011 at 9:30 PM

Jessica Penot said…
Robin,,, Thanks. I would love to hear more about your haunted experiences. It sounds like you probably have a lot of interesting stories.
January 8, 2011 at 1:19 PM

Unknown said…
The early American Room is also the only 2-story nationality rooom. There is a small hidden staircase behind the paneling that goes up to a bedroom-like chamber.

Anonymous said…
I actually live in Pittsburgh. My daughter has gone before. It was a school feild trip. She told me that it was kind of creepy.
January 19, 2017 at 12:41 PM