How to Protect Your Home from Haunting and Evil Spirits

While exploring the Burritt Museum and the many historic cabins within it last night,  I came upon an old witch bottle sitting atop a shelf in a cabin from 1825.   The witch bottle was a hideous and fearsome thing that reminded me of my love of folklore and folk remedies.  I especially love old cures for hauntings.  Witch bottles have a long history and have been popular for well over a millennium.  They were most popular in the 16th century when fear of witches, hauntings, and bad spirits reached a kind of fevered pitch that resulted in many a poor soul being burned a live for witchcraft.

The basic theory behind witch bottles is that spirits and ghosts have to count every item in a house or building before they can enter and haunt the home.  The bottle was meant to have so many small items in it that no spirit or ghost could ever count its contents. Thus the house was protected from haunting.  Early bottles were filled were filled with sand, dirt, pebbles and other small items that would be difficult to count.  By the sixteenth century the bottles took on a more sinister and disgusting tone.  They were often filled with urine, toe nails, hair, pins, and nails.   These witch bottles were thought to actually prevent a witch from casting a harmful spell on you.  They were also believed to lure evil spirits in and trap them, impaling them on the nails and pins so they can't escape.  These bottles were usually hidden and buried upside down in the home.  The picture to the side shows a classic witch jar from the seventeenth century.  It was thought that if such a witch bottle was thrown in the fire any witch that had set a curse on the owner of the witch jar would die.
Now the witch bottle has gone full circle.  Modern incarnations of these jars are said to protect against bad spirits and ghosts and are again filled with more pleasant things.  I looked at many crazy websites with recipes for witch bottles and it seems that some people still prefer the stinky bottle and place hair, nails, finger nails etc in the bottle, but that is just gross.  Also, these people are often using the bottles for larger magical purposes that I avoid.  Here is a simple recipe for a witch jar to protect your home from bad spirits and ghosts and hauntings.  These type of witch bottles are pretty and smell good too!

1.  Choose a pretty bottle with a lid and clean it
2.  Fill the bottle with some sand  or salt to make a foundation for the rest of the materials to rest on.
3 Add the pebbles, sea shells, or rosemary alternately to the bottle. After you have added these, add a bit more sand.
4.  Add  flower petals or  greenery .  There is no right or wrong way to make the bottle. Keep in mind your intent while making the bottle and envision what you want it to look like.

After you have all the items in the bottle, affix the lid. Tie the ribbon around mouth of the bottle near the lid as a final touch

Here is a picture of a modern witch bottle I found on Etsy.  The seller says the witch bottle will banish evil spirits. 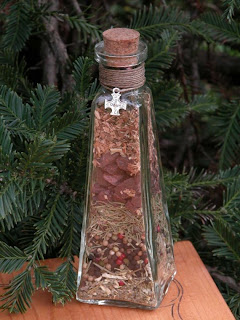 Jessica Penot said…
Pam... that is a good idea. I'll have to make some of these for Christmas.