The Ghosts of Grand Central Station 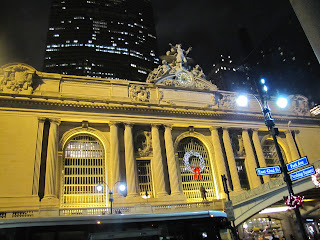 I skipped my list today.  I was far too tired to travel to far from home to chase fog and specters.  So instead I stayed close to home and went to Grand Central Station, one of the most famous haunted locations in the city. Grand Central Station is an imposing structure that is embedded into the corner of 42nd and Park  in Manhattan.  It is the largest train station in the world and one of the most famous landmarks in New York City.  The terminal is home to 44 platforms and 66 tracks.   The station is a living breathing work of art and a part of history.  Grand Central Station was built in 1871 and has been remodeled on many occasions.  The mural on the ceiling has been repainted two times now and the current painting is both lovely and infamous.  It is a picture of the Constellations.  One of the more interesting facts about the ceiling is that the constellations on it have been flipped.  The artist claims he did this purposely to show God's view of the constellations but many believe the artist just made a mistake.

The ghosts that linger in this station are many.  There are so many ghosts in the station that there is a ghost walk just for Grand Central.  My favorite ghost story from Grand Central is a lovely bit of folklore.  In the 1880s, when Grand Central was new,  Vanderbilt was one of the richest men in the nation.  He was so rich he could indulge in things that others might view as extravagant.  One thing he indulged in was race horse.   He bought the fastest racehorse in the world, Maud. S. and had her stabled next to grand central station so when he arrived on a train he could have the fastest horse in the world to deliver him home.  Maud S. died next to the station and her specter is said to wander Grand Central to this day.  There may be many more tragic ghosts in Grand Central.  The ghosts of those who have died in accidents and suicides linger in the shadows of the famous building, but Maud's ghost is by far the largest and the most interesting. 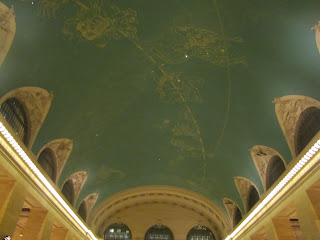 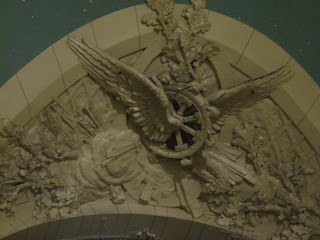 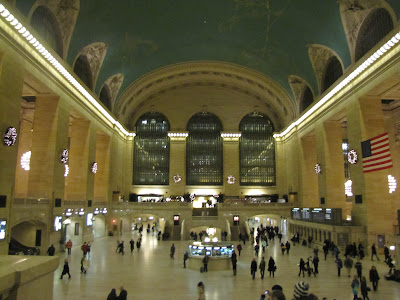 Pam Morris said…
good for maude...since I am a 'horse person' I'm glad to hear there are ghost horses wandering around with the human ones! (altho' she probably died from sadness--not being around pretty green meadows and suchlike)
December 11, 2010 at 4:31 AM

Heart Centered Psychic said…
Such a wonderful post and the pictures are wonderful. I have a very close friend who used to live in NYC and traveled quite a bit. She's talked about the murals; but I've never seen photos of the place. It's hauntingly beautiful! I'll have to ask if she's heard of Maude.....
December 11, 2010 at 11:06 PM

rodentraiser said…
I'm a little late on this, but I had to comment. Maud S was a Standardbred trotter and a world champion. I first heard of her when I read a book called The Phantom Filly by George Agnew Chamberlin. The filly in this book was named Maudeen IV and traced back to a horse who was described as "an own sister to Maud S". There was a movie made of the book called Home in Indiana starring Walter Brennan and Lon McCallister. Good movie and a great book - I'd recommend both, if you can find them.

I always wondered about the title of the book. Now hearing this story for the first time, I wonder if that's why Mr. Chamberlain called his book The Phantom Filly?
April 7, 2012 at 10:32 AM