The Many Ghosts of Sweetwater Mansion 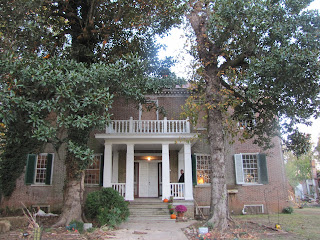 One of  my favorite chapters in my book, Haunted North Alabama, was a chapter about Sweetwater Mansion.  Sweetwater Mansion is a once beautiful plantation house in Northern Alabama.   At its peak, Sweetwater housed Governors and saw such famous visitors as president Franklin D. Roosevelt.   It is home to a warehouse full of Southern history and  many stories of sorrow and tragedy.
It is also home to many ghost stories.  I was lucky enough to be invited to do a book signing at Sweetwater Mansion this weekend.  I had never been able to enter this house before, so this was very exciting for me.   The house was opened up for tours this October by the people that are renovating it and trying to document its history.  The tours include history and ghost stories and legends associated with this old house.  All funds raised by the tours will be donated to the continued renovation of this beautiful mansion. The house is in significant disrepair and has seen much abuse.  In the 1970's, a portion of the house caught on fire and in 2007 vandals broke in and stripped the mansion down to the bones.  The renovators certainly have their work cut out for them and they have already worked so hard.
As I signed books, I was able to talk to some of the tour guides and listen in on tours.    I heard many stories I hadn't heard when I wrote my book.  For instance,  I heard the story of the porcelain lady whose face in the wallpaper becomes more defined with every passing day.  The wallpaper changes and grows and as the porcelain lady's face becomes more define new faces are appearing behind her.   I was also told about one employee who took and extraordinary picture.   Apparently, everyone became aware of the smell of burning one day.  They followed their noses to the old kitchen that had been burnt down in the 1970s fire.  There was no fire, but one woman took several pictures of the kitchen.  In these pictures,  the kitchen was on fire.  Everyone who worked and volunteered at the mansion had stories.  There were so many I could hardly keep up.  The mansion has too many ghost stories to be told in at one time.
The group is now working on a book to document the ghost stories of Sweetwater and I can't wait to read them.  I know I barely touched the surface with my book.  Being in the mansion,  I can say that there is a tangible presence in the mansion.  There is a heaviness in the air and stepping from the outside into the mansion the temperature drops over 10 degrees.  I shivered and I'm always hot.  The old house is not what it used to be, but its beauty remains.  Bits of wallpaper and old rooms whisper of days gone by when it was the most extravagant home in the South.  Old pictures, faded by time, show what once was.  The house feels  trapped in time, perhaps it is held there by its ghosts. 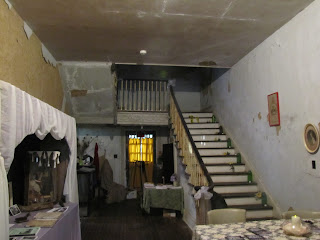 Notice the Green Orb at the Top of the Stairs in This Picture.  If you look closely, you can almost see a face.
Email Post
Labels: Alabama Ghosts Plantation Ghosts Southern Ghosts

Julie Ferguson said…
It is very sad when vandals break into a historical treasures and destroy the place and steal objects. Kudos to those that are restoring the place. What an interesting mansion and history.
November 2, 2010 at 8:09 AM

Lewis said…
The stories are interesting, but the writing leaves a lot to be desired. Short, choppy sentences do not flow well and then there are all those unnecessary words (e.g., "The house was opened up for tours..." -- UP is unnecessary), and unnecessary capitalization ("Governors" should be lower case).

And you really need to invest in a thesaurus. "Being in the MANSION, I can say that there is a tangible presence in the MANSION. There is a heaviness in the air and stepping from the outside into the MANSION the temperature drops over 10 degrees." How about: "Having visited the mansion, I can say there is a tangible presence, a heaviness in the air. The temperature inside the house was at least 10 degrees cooler." (But then, of course, the temperature inside an old house with high ceilings is going to be 10 degrees cooler!)

Ms. Penot, if you intend to continue writing, please invest in a few books on English grammar and composition -- and study them!
June 15, 2011 at 5:41 PM

Anonymous said…
Lewis, I've never read Ms. Penot's work and can't comment on the quality of her writing, but I can comment on your prosaic post. You come off as a major jerk. I'm a professional writer. I assure you that it's a lot of work to write a book and that alone should command a measure of respect for her efforts.

Most writers feel that constructive criticism is welcome, but hostile criticism always says more about the critic than the writer.

The Exorcist said…
"Anonymous" - What Lewis said is correct... you are a JERK. Hmmmm... lets see if we can put it in a format even YOU can understand.
How about:
"Having visited your comment, I can say there is a tangible evil presence in your soul, a heaviness in the air and a chill in your disposition and no compassion for others which makes you look like a complete JERK."

Yes I purposely used incorrect grammar just to tick you off. I don't know who you think appointed you "Grammar Police", but you are going about effecting change in a very negative manner. You could learn some manners before commenting on any blog in the future.