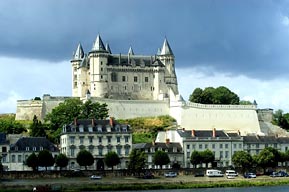 The Chateau De Saumur is a hauntingly beautiful and very haunted castled nestled in the historic Loire Valley of France.  The Chateau De Saumur  was built in the 10th century by Thibault le Tricheur the Comte de Blois.  The castle was completely destroyed in battle in 1076.  Henry II  Of England rebuilt the castle in 12th century.  Phillip II of France retook the castle as part of France in the 13th century.  The castle seems to be tightly tied to France's turbulent history.  It witnessed the wars between England in France and changed hands many times. In 1589 the castle fell into the hands of King Henry de Navarre, a critical figure in the French wars of religion and the first Protestant king of France.

In 1621 the castle was turned into an army barracks and  later  into a prison.   It would house many notourious figures.   The most notorious figure to live in The Chateau De Saumur was the Marquis de Sade.   The Marquis de Sade is most known for his writings in which he wrote about the link between sexual gratification, torture, and pain.  His name is the origin of the word sadism.  The Marquis spent most of his life in prison.  He was inprisoned for his disturbing writings, but continued to write in prison.  He was inprisoned in many asylums and prisons throughout France during the 32 yrs he was incarcerated but his ghost is thought to linger at Chateau De Saumur.    I have been unable to find any real information on the nature of the haunting at the Chateau, but I was intrigued by any haunting that involves De Sade, a man whose cruelty is legendary.

The Chateau itself is quite lovely.  It is one of many beautiful castles in the Loire Valley and has been turned into a museum dedicated to horses.  I missed this lovely castle in my tour of the Loire Valley, but I will look for it next time.  De Sade's ghost isn't something I would want to miss.
Email Post
Labels: French Castles French Hauntings FrenchGhosts Ghost Marquis de Sade

Lewis Powell IV said…
If you haven't seen the movie "Quills," I would highly recommend it. It's about the good Marquis and his time in prison.
November 14, 2010 at 8:21 PM

Jessica Penot said…
I loved that movie! Geoffrey Rush is an amazing actor. It was more than a little depressing, but I'd probably watch it again if I had the chance.
November 15, 2010 at 5:25 AM

Julie Ferguson said…
I would be worth going back and checking out the castle. What a cool place to visit.
November 15, 2010 at 12:21 PM