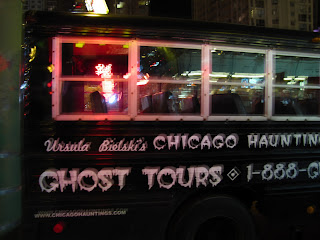 Anyone who reads Haunt Jaunts on a regular basis probably knows that I am not great at making haunted tours work.  I wrote a blog for her on all the things not to do while traveling and planning a ghost tour.  This trip to Chicago, however,  I made it work.  I went on Haunted Chicago's Ghost Tour.  I was a bit disappointed I didn't get to ride on the wonderful black ghost tour bus, but I was excited none the less to see the dark side of Chicago.

Chicago does have a deep, dark side.  The best part of this tour was the history.  Chicago's history of gangsters and fire leaves a mark of sorrow in the city that lends itself to hauntings.  Our tour guide, Tommy was very knowledgeable about the history of the city and told the stories and history very well.   I was a bit surprised by the two tour guides, because other tours I've been on in the past have had a touch of theatricality about them.  In New Orleans,  our guide looked like something out of interview with a vampire.  Tommy, our guide, was just a guy.    I did have several issues with poor Tommy.   I hate to say bad things about people, but Tommy spent quite a bit of time talking about his theories behind hauntings.   He encouraged picture taking and told travelers that every orb in ever picture was proof positive of hauntings.  He said this tour must bring out the ghosts because everyone was getting so many orbs in their pictures.  Never mind that it's fall and pollen season and that most people believe orbs are actually a product of dust and other particulate in digital photography.   He didn't mention any of these things.  He just said we were all very good ghost photographers.

Other theories Tommy supports are that haunted cities are "always" by water.   I have heard many haunting theories and surely this one intuitively makes sense, but since I love to follow desert haunted explorers Above the Norm and Autumn Forest I know that there are ample hauntings in the desert and being by a large body of water is not prerequisite. Since I've also travelled quite a bit and looked at haunted locations all over the country and some in other countries,  I know there are many amazing haunted cities that are not on water.  Also,  I enjoy the presentation of theory, but Tommy discussed all of his theories as if they were fact.  He didn't say I believe or according to legend.  He didn't mention there were other theories he merely states, "All haunted cities are located on water."  Tommy had many theories like this he discussed during the tour.  He discussed negative vortexes and other things as if every "ghost hunter"  believed and knew these things as fact.  I did try to talk to Tommy after the tour to try to clarify some of the statements he made or get a feel for why he was so vehement about his beliefs, but he literally ran away from me when I tried to talk to him.  He jumped on the bus and closed the door.  Maybe it was my third eye or I had something on my nose, who knows.

Despite my issues with Tommy,  the tour was nice.  It had some wonderful stops and I got some amazing pictures of Hull House.  I really enjoyed the depth of history on the tour and the choice of stops.  I will be writing about many of these stops this week.  All in all, it was a fun tour,  I just wish I'd gotten a different guide.

My favorite stops that I will go over more this week include:

1.  The City Cemetery:  The remains of a relocated cemetery that still may house unmoved bodies is now a park.  During the great fire many people burned to death in open graves while trying to escape the flames.

4.  John Hancock Center:  This was the inspiration for the building in Ghostbusters and you can get drinks there.

5.  Site of Eastland Disaster:  Tragic disaster resulting in 844 deaths left  many ghosts behind.

The picture below is  from Hull House.  Lots of ghostly activity on the stairs I think, but I open to other interpretations. 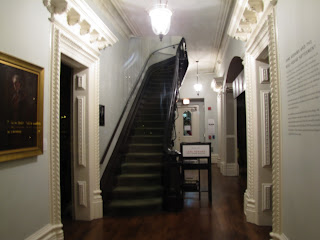 Lewis Powell IV said…
I've enjoyed Bielski's books, but I would have to side with you in regards to Tommy. Have you been on any of the ghost tours in Savannah? I went on one and it was awful, but mostly because the guide appeared to be drunk, if not tipsy.

Your photo is intriguing. Was it taken through glass or were you standing in the hallway? There is a definite anomaly on the stairs.
October 9, 2010 at 11:48 AM

Heart Centered Psychic said…
I can't believe I live this close and have never been. I'm hoping when I go I get a guide other than Tommy. Sorry to hear your third eye scared him away before you had a chance to talk to him.

Pam Morris said…
I'm thinking Tommy was probably more actor than a real paranormal type...I'm sure the companies try to find people like him to deliver the goods and most tourists won't know the difference...no wonder he ran from you! I'm sure he knew what he was up against!
October 9, 2010 at 4:51 PM

Jessica Penot said…
Lewis... That sounds terrible. I guess I should just be glad that Tommy was sober and articulate even if he said some odd things. I did take the picture through the glass. It was dark outside with no flash.

Brenda.. You should definately try the tour. There were several guides. The lady guide was much more friendly.

Pam. I have heard some of these tour groups use actors. I saw an add in the paper for auditions for the chatanooga group.
October 10, 2010 at 6:57 AM

Pangs said…
I swear I'm going to hit up one of these tours one day!