A Night of Haunted Houses! 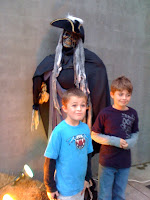 Last night I went a little crazy.  I went to two haunted attractions.  My evening began with taking my two sons to the school haunted house.  The haunted house was put on by the Venture scouts and was actually pretty good.  For something that was made by eighth graders on a limited budget in a school cafeteria, it was very well done.   Sadly,   I went to a haunted house at the Space and Rocket Center a few years ago that was  about as well put together as this one.  It was mostly based on many costumed scouts jumping out of the darkness, but it gave my youngest son nightmares so it was probably even a little scarier than it needed to be for the age group it was targeting.  There was a kid in a clown costume that really scared the crap out of both my kids.

The second haunted house I went to was much more grown up.  There was a haunted house way out in rural Alabama that I always admired, but was never willing to drive over an hour to get to called The Haunted Manor.  Apparently,  the owners of the Haunted Manor closed down and one of the partners reopened in Huntsville, Alabama.  This haunted attraction is now called Distubia and features some of the most impressive props I've ever seen in a haunted house and this includes such professional haunted houses as the Ripley's Haunted House.  This haunted house featured a 40ft Satan holding screaming people by bloody stumps,  a native village with dinosaurs that jump out front he darkness,  an evil laboratory, many spinny hall things with dismembered, decaying corpses reaching out at you in your disorientation, a very impressive cemetery with a beautiful mausoleum and an enormous gargoyle that leaps at you when you approach, and the usual array of costumed weirdos screaming and raving at you from the shadows in attempts to make you jump.

I can't say how scary this haunted house is because I really am numb to these things.  I realized this at the very beginning of this haunted adventure because about one minute into the haunted attraction some grown man screamed in terror and grabbed onto my jacket  in the darkness.  I was in the front and he was too afraid to walk through the damn attraction without clinging to me.  He was so afraid he practically tore my jacket off gripping onto me, I would have thought he was some kind of pervert if I hadn't have looked back and saw everyone else was clinging to whoever they could in terror.  They were all strangers to me and many strangers to each other, but all laws of social decorum were lost in the face of a decomposing hands reaching out at them from the walls.  I finally shook my tag along and pushed my husband behind me and took the lead, where I could better study the props and actors.  So, although I wasn't afraid, judging from the screaming and clutching behind me I have to assume that this was a terrifying haunted house.  I was also impressed by the full costumed band that entertained us with bad 80s hard rock while we waited in line.  Overall,  I think this is the best haunted house I've been to so far.  More to come next weekend,  I hope I go in with a slightly braver lot next week.  I really wanted to punch the man behind me.
Email Post
Labels: Disturbia Haunted House Review Huntsville Alabama Haunted Attraction Reviews

Dio said…
"They were all strangers to me and many strangers to each other, but all laws of social decorum were lost in the face of a decomposing hands reaching out at them from the walls."
That is one of the best things I have ever read, and I'm fairly well read!

Some of my favorite memories of Halloween are from when I was around the age of your sons, so I feel a thrill for them that they now have that scare as a memory!
October 18, 2010 at 7:21 AM

Admin said…
Halloween is almost here and I still haven't gone to any fall festivals or haunted houses. I need to get my butt off the couch!
October 19, 2010 at 11:19 AM

Unknown said…
Nice article, the facts are a bit mixed up. The other hauted house was called Graystone Manor and it is still in business under the name of Arx Mortis off of hwy 72 in Killen Al. It is worth the drive to go check it out.
October 19, 2010 at 11:32 AM

Anonymous said…
Thanks for the article that wasreally nice! I see the other haunt has popped up and gave themselves a quick ad! It's sad that one place cant get a little exposure without the others trying to jump in. Good thing is most can see that. Again sorry for the "nuttssos" trying to correct you. This link was posted on Disturbias Facebook and they watch it like a hawk! Many have said they watch our facebook in their box office it's really a compliment. Again Thanks for the great ad! Shane Dabbs Owner of Disturbia
October 19, 2010 at 1:38 PM