The Old Jail Ghosts in The Main Street Cafe 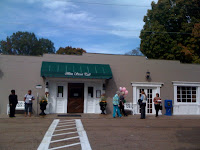 In the small town of Madison, Alabama there isn't much to the downtown.  The old buildings are reminders of quiet days when Madison was a tiny town unto itself.  These days Madison is more of a suburb than a town itself.  Everyone drives off to Huntsville to work and the little downtown area is mostly forgotten.  The Main Street Cafe in downtown Madison is one of the reminders of the old days.   It was the old jail house.  Inside the Main Street Cafe, the two chambers that used to be jail cells remain.  The doors have been removed but the barred windows remain.  You can eat in the jail cells.    The Main Street Cafe has been remodeled so the cells are the only pieces of the history to let you know that this  pretty, quaint eatery was once a jail.   Most people don't even know The Main Street Cafe was once a jail.  They enjoy the place for what it is.  The food is good and the atmosphere is pretty.   You can easily forget that the Main Street Cafe has a darker past.  The cafe was once a jail and it still has its ghosts.
According to employees of the pretty restaurant,  the old jail is haunted by a ghost they call George.   George isn't a particularly malevolent ghost, but he does like to mess things up.  He enjoys moving things so that when cupboards are opened in the morning everything falls out.  He enjoys moving objects in the kitchen so that the staff can't find them.  In general,  he just enjoys making a pest out of himself.   The staff didn't know who George was.  They weren't sure if he was a prisoner, but they know he likes to make life more difficult for those who have to work at this old jail. 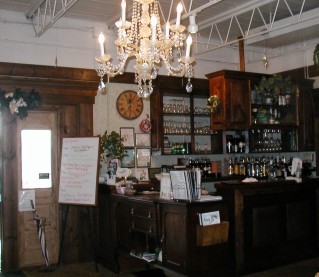 Anonymous said…
Looks like a good place to visit. We have an old jail here that people say is haunted.
October 26, 2010 at 6:15 PM