I'm Hoping this Haunting is My Imagination 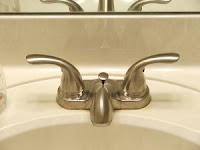 I fully believe in attribution bias.  I believe that we see what we want to see and hear what we want to hear and when we believe in ghosts and hauntings,  evidence will present itself that supports our beliefs because we are specifically looking for evidence to support our belief.  I am very aware of these biases and try to look for rational explanations before I leap to conclusions.  I also admit that I am forgetful and may do things and forget I have done them.

However,  tonight I came home from cub scouts with my sons and every faucet was on in the bathroom.  I can't believe I would turn on the shower, both sinks, and the bathtub before I left.  I can't imagine why  I would do such a random act, nor can I imagine any rational explanation as to how this would  happen.  I could let this go, however.  I probably forgot turning everything on, right?   But later on I was sitting at the computer working on tonight's blog, which was supposed to be about Halloween, when the sink turned on again.  I'm sitting here.  I can see the sink.  There was no one there.  So  I ask all my readers,  is this just the product of my very active imagination and a passion for ghosts or should I be concerned.  I'm hoping its my imagination.
Email Post

Sharon Day said…
I say you spend the day not going in the bathroom at all and dust the knobs and see if something that turned the knob left a print... The other option, lock the door if you can and use a hairpin to open it up when you want to go back inside, but leave it locked and inaccessible all day. If the faucet goes off, it was definitely something bizarre. Just on the off chance, pull a Jason and be sure it's not the kind of knob that pressure can make it turn on its own if it's not turned off all the way.
October 5, 2010 at 7:00 PM

Jessica Penot said…
Thanks for the advice. I'll lock the door all day tomorrow. I didn't know there were faucets that pressure can make it turn on its own. Hopefully those are the kinds of faucets I have. That is a very reasonable explanation
October 5, 2010 at 7:59 PM

Joanne Kennedy said…
This reminds me of one house I lived in that was full of paranormal activity and it was before I became a paranormal investigator.

I lived with my sister and her two boys. We all left the house. My sister was a major pain about turning off all the lights when we were not in a room. So we all learned to shut the lights out when not in the room.

But, when we left it was during the day so the lights would not have been turned on any way.

We came home and it was dark and EVERY light was on in the house. Even the light above the stove.

We were super scared someone was in there but no one was there and no one had access to the house but us. The house was NOT broken into either.

Before this happened we had a few things that we would just talk away as being caused by something else. After this happened and it got our attention things really started to happen more often and bigger things. Then we found out who it was and what they wanted. After that, it went away.

Nothing to be scared of but it sounds like someone is trying to get your attention too.
October 5, 2010 at 10:05 PM

Yes, first try to rule out all explainable explanations; such as, the pressure build up in the pipes. I have actually come across this a time or two.

I am not a plumber by any means, lol, but that is a good explanation.

Being in this field, I myself, from time to time, find asking...Is it paranormal? Or is there a logical explanation for some of the stuff that happens in my own home.
October 6, 2010 at 12:56 AM

Mr. Macabre said…
If you have an iPhone, you might want to check out some ghost detection apps that are available. I have had some interesting results with one in particular...

Jessica Penot said…
Thanks for the advice. Mr. Macabre.. I have an iphone and I will definately check that app out.
Life of a ghost hunter.. I know nothing about plumbing, but I'm believing the pressure in the pipes is probably the problem until further notice.

Joanne.. I hope whatever happened last night is the end of this because I don't have enough attention to go around.
October 6, 2010 at 7:57 AM

Lewis Powell IV said…
So, did you try the locked door? Did anything else happen? Enquiring minds want to know!
October 6, 2010 at 10:38 PM

Gummerfan said…
I doubt you have a ghost. In my opinion, sounds more like the work of house fays, y'know, those wee folk who enjoy playing little pranks.My wife refuses to believe that they're who keeps messing with our keys.
I know a family that had to move out of their log cabin in the woods because of a troll problem. The area has since been "built up" with new home and road construction. This must've caused the trolls to move on since the present owners have no problems.
October 7, 2010 at 10:47 AM