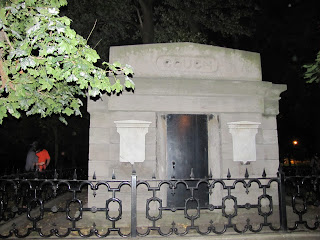 Unbeknownst to most, beneath some of the most populated and heavily used land in the country, there lies the remains of a cemetery.   Chicago's old City Cemetery  used to occupy space that is now Lincoln Park.   Begun in 1846, it used to take up space that was on the edge of the city.  However, as the city grew and land came into high demand, a movement began to move the city cemetery.   In 1866,   this idea was shot down by courts and it seemed the cemetery would remain along this beautiful lake front property forever.   However, in 1871 something happened that changed everything.  In a small barn a fire began that moved into the city and devoured Chicago.  The flames of the inferno were so intense that only 3 buildings remain that stood against the all encompassing flames.  The fire devoured everything in its path.  People fled into the cemetery from the flames and jumped into open graves to escape.   But the fire had no mercy and the flames roasted those in open graves and even destroyed the grave markers.

After that there was no question as to the relocating of the cemetery. A massive disinterment effort began in 1872; in 1874, the last burial lots were condemned. The last acknowledged removals in this process occurred in 1877.  However,  many of the graves markers were lost in the fire so many bodies were not moved as part of this process and new construction in areas once belonging to the City Cemetery often reveals old corpses laying in unmarked graves.    It is no telling how many bodies still lay beneath the earth of the ground that was once the old City Cemetery.

Only the Couch Mausoleum remains as an official reminder of the cemetery.  Couch's family would not allow this tomb to be moved or even opened so it stands quietly in a lonely corner of an old park.   It is even a mystery as to how many bodies lay within the tomb.   Of course,  stories of ghosts and haunting proliferate in the area around the mausoleum where the dead still walk.  Our ghost tour told a tale of a phantom dog that wanders the grounds at night, leaping upon those that walk alone. 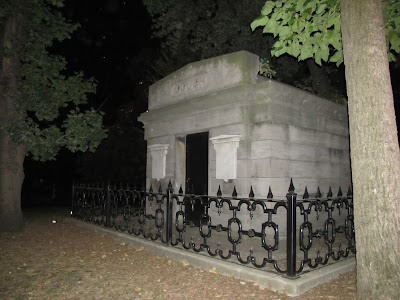 Julie Ferguson said…
That is so sad about those that hid in the open graves from the fire only to be roasted alive. I bet there is lots of activity there. Great story...
October 11, 2010 at 3:42 PM

Pangs said…
I think most of the bodies were moved to Graceland Cemetery, which is near Wrigley Field.

They are currently in the process of moving, St. Johannes, one of the old ones.


Chicago Tribunes article about O'hare expansion and the cemetery

Jessica Penot said…
Wonderful! I'm glad they are moving them. Graceland in a beautiful cemetery too. That is a much better final resting place. Thanks for the information
October 11, 2010 at 6:34 PM

Courtney Mroch said…
Once again, I love the writing and care you took with this, but also the pictures you used to illustrate with. They're wonderful, as always!
October 12, 2010 at 7:00 AM

Hamilton Coe said…
I enjoyed this. Interesting story and really evocative photos. I don't think the proposed O'Hare expansion augurs well, though.
October 12, 2010 at 11:33 AM