A Story of Exorcism 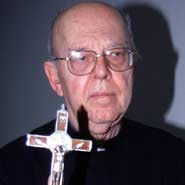 Father Gabriele Amorth is the chief exorcist of Rome.  He has a very uncommon job in the church and a very uncommon gift.  He is a real person.  His stories are not fictional nor are they derived from the imagination of Holywood or a writer.  He has performed hundreds of exorcisms and he has also written a book called An Exorcist Tells His Tale.  Unless you have been raised Catholic, which I have been, this is a difficult book to read, because Father Gabriel is a Catholic Priest above all else and his writing is deeply religious.    However, if you want to learn about real cases of demon possession, he is one of the few experts in the world.

I have read several bloggers lately comment that possession is often confused with mental illness and that people of science would never accept possession as real.  One of the most interesting things reading about Father Gabriel does is negate this belief.  He describes many of the cases  he has worked with in his book and in almost all of them the people he exorcises go the doctors and psychologists and psychiatrists first.  They go through years of medication and electroshock therapy and none of it helps, but after the exorcism their torment ends.   The psychiatrists and psychologists in many cases have given up.

One of the Father Gabriel's most interesting cases is the case of a man called G.M.  G.M describes being heavily involved with two women who practiced the dark arts.   Following these relationships,  he began to have symptoms which were physical at first.  He was tired and weak and sick all of the time.  He had chronic headaches.  He also suffered from severe depression and thought of suicide. He was admitted to a psychiatric hospital in Rome and he found no help there.  He sought help at medical hospitals as he was also running a constant fever and for a while none would even admit or treat him as they could find nothing wrong with him.  Finally,  he was admitted and discharged and again no on could find anything wrong with him.  He was overtaken by vomiting fits and shortly after this the demon was able to take his body. During these periods, G.M. describes himself as being in hell.   During one of his rare lucid moments,  he finally sought the help of his parents.  G.M. still believed he was probably suffering from a fugue state or other psychiatric condition.  He thought that he probably had schizophrenia and epilepsy as he had also started having seizures.   He had studied psychology in college and he was not a man to believe in demons first.

Finally, G.M. talked to a Friar about his problems.  The Friar told him that someone had cast a spell on him and that had caused his symptoms.  G.M. was astounded.  One of his witchy ex's had cursed him when he dumped her.  Of course,  he hadn't thought anything of it, what rational person would?  But the Friar knew this without him even really knowing it himself and the Friar sent him to Father Gabriele. After a simple exorcism,  Father Gabriele was quickly able to drive the demon out and G.M. has never had any of the many symptoms that tormented hims since that day.

There are many stories like this in the good Father's book, but this is the only story written by the possessed.  It is difficult to read at times, because it is so terrifying, but in the end finding the Father set him free.
Email Post
Labels: An Exorcist Tells His Tale Demonic Possession Exorcism Exorcists Father Gabriele Amoth Possessions

Just back after vacation ... been without internet a while and I'm still catching up. I owe you comments and thanks for the award. !

I agree with you, the subject is very disturbing to read about. I'd heard of a priest or two that had written about exorcism, but never read the material myself. Not sure if Amorth is one of the ones I've run across. I know one has a website ... the details are not offered to the public, only to other exorcists. And there is contact info if people need it. (Yikes).

Don't recall what I've commented in the past, but my soul rescuer friend told me more than once about the sites of former mental institutions having lots of issues (some from residual problems leftover from forme residents and sometimes from occultists using such abandoned sites for rituals ... or both). And I've also heard about mental health professionals not being able to distinguish between biochemical and environmental illness and possession. I have also read of some counselors who are a bit alternative after years of conventional practice when they come to allow for the possibility of paranormal influences and things they cannot treat or explain.

As I've mentioned, my friend's work included the more unsavory entities. We were fast friends and our connection was really unlikely and seemingly so random -- he lived in the UK. I often thought/wondered -- and he often implied -- that it was a fateful connection because perhaps I was meant to do his kind of work.

I am intrigued by that thought but also daunted and intimidated. Shortly before he died (his death was unexpected although he'd had foreshadowing of it and he had been in ill health since I met him), he reiterated to me that I might give it a try. He taught me a lot in the three years that I knew him. But I am not convinced I can/should/wish to do that. Especially without a mentor. I wouldn't know where to begin, just to name the first thing. Before he died, although he had never read for me before and I never asked (except maybe some past life stuff), he gave me a message that he'd received for me to the effect that I would have help if I chose that work.

Been a bit lost as to whether to persue it since he died (over two years now). I have looked for more information on and off, a lot of which agrees with what I was taught. But I think that the work is like the grimmest police work (A did in fact compare himself to a police man when he first described his work to me). All the people I've read who do it say that you pay a price for doing it. You lose your innocence and it can be destabilizing. (Oh is that all?;-) Many say it should be left to clerics because they lead more pure lives and so are better able. But lay people and mediums do assist. All very interesting. But I dither over whether I really want to know more. It's all too sureal in some ways ... when I channel my Part Soccer Mom Raised By Science People side especially. I think I like retaining some of my ... skepticism because it keeps me safe, LOL. YKWIM.

Anyway ... I see the link to your book up there! Can't wait to read it. Maybe you will autograph it for me sometime if I send my copy to you. I am reading a couple of paranormal books that I got on vacation ... maybe we can book swap sometime. LOL.

PS MaryAnn Winkowski also has info on her book about curses and how to remove them and defend against them.
September 8, 2010 at 6:46 PM

Joanne Kennedy said…
There is no way I could read this book. This is a subject that scares the crap out of me! I feel that by reading about it, watching a movie or even talking opens one up to demons. I love going on paranormal investigations but if I ever came across a place that had demons I would be out of there. To scary for me. I only like nice ghosts or ones that won't hurt me.
September 8, 2010 at 7:07 PM

Jessica Penot said…
PaleMother... If you would even consider doing that kind of work you are braver than me. I try to avoid anything involving demons at all costs. But I think if you can do it, it is a great gift.

Joanne... I really agree with you entirely. I never go anywhere where I feel this kind of presence. It terrifies me. I'll stick to ghosts, but I really respect those brave enough to help.
September 8, 2010 at 9:08 PM

Missy said…
Seems I have a new book to seek out and read! (=

Did you get to watch some of the video(s) that I posted on my page about this subject? Pretty scary and spine-tingling, if you ask me!
September 9, 2010 at 5:39 AM

Heart Centered Psychic said…
This one except you've written about is enough to raise the hair on the back of my neck. I'm just happy he finally found someone who could help him.
September 10, 2010 at 5:34 AM