The Phantom of the Orpheum Theater 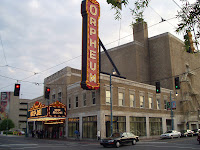 The Orpheum Theater in Memphis Tennessee's is a gilded theater of unforgettable beauty.  The Orpheum is considered by many to be the most beautiful theater in the South and although I haven't seen every theater in the South,  I know the Orpheum rivals theaters I have seen in bigger cities, like New York.  The Orpheum is unforgettable for me for many reasons.   It is a constant link in the timeline of my husband's and my love story.   We went to see our first concert here,  and although we were not even together,  we met each other in the aisles and said mean things to each other.  This was because we were sixteen and not very good friends at the time, but we would later learn that was the beginning of a long love.  Later, after the turbulence of adolescents had past, he would take me on an amazing date at the  Orpheum to see The Phantom of  the Opera.

The Orpheum is very well known for its ghosts, so even as I watched The Phantom of the Opera,  I knew it was ironic that we were seeing it in a theater known for its phantoms.  The Orpheum theater has had a turbulent past.  It was built in 1890 on the corner of Main and Beale Streets and was called the most beautiful theater outside of New York.  At the time, it housed mainly Vaudeville performances. Vaudeville at the Orpheum was successful for many years.  In 1923, however, the Orpheum burst into flames during a strip-tease by a woman named Blossom Seeley.  The Theater burned to the ground.

In 1928,  the theater was rebuilt.  The days of Vaudeville had past, but a new art came, defining a new era.   The Orpheum became a movie theater.  Time faded the Orpheum's beauty and by 1977 the city of Memphis began to make plans to demolish the once legendary theater.   However,  the city managed to raise $5 million to save the theater and it became one of the premier venues for off-Broadway theater and concerts in the Southeast.

The Orpheum doesn't hide from her ghosts like many historical locations do.  It places its ghosts stories proudly on its playbills and on its webpage.  All you have to do is google the Orpheum to be flooded with a plethora of stories about the phantom tenants of this old theater.  The most famous ghost of the Orphem is Mary.  I always looked for her when I went there, but I was never successful in finding her.  Mary is  a little girl in a white dress and pigtails sitting in seat C-5, Box 5.  No one knows for sure how Mary came to haunt the Orpheum.  She has been seen by numerous employees and visitors to the Orpheum, but history doesn't give us a clear answer on who she is.  Many believe she was a little girl who was hit by a trolley car outside the theater, but there is no documentation to substantiate this claim.   Mary isn't alone.   Psychics visiting the Orpheum claim there are as many as eight other ghosts wandering this theater, but like Mary, the origins are unknown. 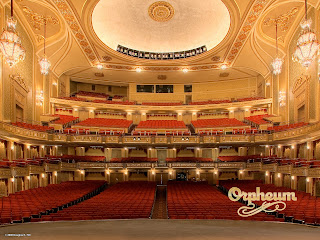 Julie Ferguson said…
Beautiful place. The Orpheum Theater in Phoenix is also said to be haunted. I will have to check into this and see if it is true.
September 26, 2010 at 9:28 AM

postzoom said…
We are looking for great blogs and we would love it if you registered yours with us.

PostZoom is a directory of the best blog posts which helps readers find great blog posts and blog owners drive more traffic to their blog.

If you are interested in joining, please visit http://postzoom.com/register.aspx (yes, it’s completely free).

Pam Morris said…
beautiful theatre! and how perfect that you guys saw "phantom of the opera" there!
September 26, 2010 at 2:25 PM

Anonymous said…
Howdy! Someone in my Myspace group shared this
site with us so I came to look it over. I'm definitely enjoying the information. I'm
book-marking and will be tweeting this to my followers!
Terrific blog and outstanding design and style.

Anonymous said…
Where would this seat be on the official seating chart?
December 18, 2014 at 9:27 PM

Unknown said…
I want to visit the theater next time im in memphis i got a picture of Elvis out front by jim barber shop getting a ticket from a cop ,lol
September 8, 2016 at 8:29 PM

Unknown said…
Theres nothing like downtown memphis
September 8, 2016 at 8:30 PM

Unknown said…
When i go back i will visit the theater, theres a picture with Elvis getting a parking ticket out side the theater in his 56 Eldorado cov ,
September 8, 2016 at 8:32 PM

koko said…
Its funny that I should find this blog. I have actually seen one of the ghosts on a field trip to the Orpheum and every time I go back I always see that same ghost out of the corner of my eye. if you want to know the whole story, here is my Gmail. korah.white7@gmail.com. I will gladly tell you this story and many others from historical sights I have been too in Mississippi. yes I know the Orpheum is in Tennessee by the way.
November 18, 2017 at 6:31 PM