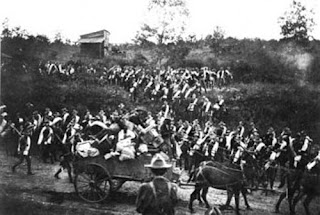 One of the most interesting things about looking for ghost stories is discovering history. Most ghost stories touch on some piece of history. In my journey to Chattanooga, TN a few months ago, I went in search of history and didn't know what I would find. I did no research. I just popped in to the Lookout Mountain Battlefield and started to read about the Battle of Chickamauga, which saw some of the civil war's hardest fighting. The battle began in a fight for Chattanooga, TN which was the rail center of the South. It started in 1863 when General Rosecrans brought his army of 70,000 men to Chattanooga and faced off against The Confederate General Braxton Bragg's army of 43,000 men. General Bragg dug his army in and the fight for Chattanooga began. The fight lasted from June until August when Bragg withdrew southward, abandoning Chattanooga and retreating 26 miles South to the final site of the Battle of Chicamauga.
The battle began on Sept 19th. The Confederates used the site I visited on Lookout Mountain to bombard the battlefield below with cannon fire and were able to push the Federals back to Chattanooga, but causalities for both sides were heavy. It claimed an estimated 34,624 casualties (16,170 for the Union; 18,454 for the Confederates).
Since that time there have been claims of every type of haunted and ghostly occurrence in this area. There have been mysterious deaths, numerous ghost sitings, and even claims of a mysterious "green eyed beast" that roams the battle sites at night. Apparently, these supernatural specters come out at night and casual observers from all walks of life have reported seeing a woman in white haunting the battle field looking for her lost love. They have seen glowing orbs and dead soldiers. According to www.hauntedamericatours.com, this battle field ranks #3 in the most haunted battle fields in the country.
Email Post

Pam Morris said…
well, I can certainly believe that...with all the lost lives in that place, lost, mournful souls must surely be hovering about. I've always thought that battlefields are such sad sites...what a terrible and oftentimes, useless loss of life occurred there.
September 22, 2010 at 7:32 PM

Lewis Powell IV said…
The "green eyed beast," or Old Green Eyes, as he is commonly known, is one of the enduring legends of the Chickamauga battlefield. When I was visiting last year I overheard a ranger in the visitor's center talking about ghosts. Well, it was less talking and more a vicious diatribe about how ghosts didn't exist and that he was tired of encountering people who asked about the ghosts, especially Green Eyes. He went on to say that the Green Eyes legend was invented by a ranger as a joke in the 70s. While he was spouting the official Park Service statement that none of their properties are haunted, I was not happy to hear it put in such angry terms.

I'm trying to find, if I can, the earliest mention of the Green Eyes legend. Some sources state that the legend originated with the Native Americans in the area, though I haven't seen any citations that point to that.

By the way, I recently bought your book on North Alabama and I wanted to congratulate you for such a marvelous book. I just recently wrote in my blog, http://southernspiritguide.blogspot.com/, about the lack of sources on Huntsville ghosts and lo and behold, your book appeared. I will certainly be using it when I write about Huntsville in the near future.
September 22, 2010 at 8:09 PM

Jessica Penot said…
Lewis, wow. What great information. I love to hear about the research behind these legends. When I researched my book, I found a lot of legends were just stories, but they were still interesting. It sounds like you've uncovered an interesting story behind this green eyed legend.

Thanks for buying my book. I stopped by your blog. It is wonderful. I will definately be putting it on my regular reading list.
September 22, 2010 at 10:19 PM

Hamilton Coe said…
Does your National Park Service pursue an official 'no ghosts' line or does it just apply to sensitive areas, like scenes of carnage? The last time I visited Culloden, staff members disparaged a visitor who had loudly (and completely unselfconsciously) recorded his impressions into a dictaphone while his wife trailed glumly behind him. The staff members (who seemed to know the couple, half playfully referring to them as 'Fred and Daphne') clearly considered his behaviour disrespectful. This must particularly apply in Civil War battlefields were so many photographs and records of the fallen survive that staff develop an affinity to them. (It's just as possible, of course, that the Ranger in question was a common or garden boor!)

According to accounts I've read, references to Old Green Eyes precede the the 20th Century, though it's interesting fairly recent phenomenon (or invention) are sometimes accorded roots in antiquity!

I enjoyed reading this very much.

Julie Ferguson said…
Love to visit the battlefields. With all the killings that went on there, the ghostly activity reports are crazy. I didn't know about this particular battlefield, so thanks for the information.
September 23, 2010 at 8:38 AM

Lewis Powell IV said…
Jessica, thanks for the compliment! I've enjoyed reading your blog as well.

Hamilton, I honestly can't say for sure if that's the "official line," though I have seen that referred to in a number of places. The ranger that I heard in question, seemed to have a distate for all believers in the paranormal whatsoever. I recall him also mentioning that he spoke to producers of a TV show that wanted to do a show about the ghosts of the battlefield and he responded that it wasn't haunted and claimed he'd hung up on them.

I visited Mammoth Cave in Kentucky recently (another location that's reported to be haunted) and one of my ranger guides had written a book on the lore of the cave which included ghost stories. Indeed, Mark Nesbitt, the author of the Ghosts of Gettysburg series (which I highly recommend), is a former NPS ranger and quotes a number of rangers speaking on their experiences.
September 24, 2010 at 5:02 PM

Jessica Penot said…
Hamilton, I'm not sure about TN but Alabama has a no ghost policy. I went to one haunted location and asked the rangers some questions. They said they could not answer my questions, but "off the record" told me numerous stories. I get the impression it is the policy here, but it is very loosely inforced.
September 24, 2010 at 11:01 PM