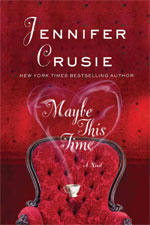 There is nothing more magnificent than a really good book.   Maybe This Time is a really good book and it is a Gothic ghost story  and that just makes it that more delicious.   I don't usually read romances.  I find them artificial and boring, but the characters in this book were real enough to make the romance interesting and the ghosts were more than interesting enough to make up for the kissing.  Of course, the kissing lead to sex, which makes the romance much more palatable for me as well.

Maybe This Time is the story of a woman, Andy,  in her thirties who is haunted by her first marriage. She's been divorced for ten years and she wants to move on.  She's  found a man she wants to marry and all she has to do is cut the final cord that attaches her to her ex-husband.   Her ex-husband keeps sending her money and she hates it.   She summons all her courage and goes to him to demand that he stop sending her money, only to be suckered into doing a job for him.  He wants her to go down to Southern Ohio to check on his orphaned niece and nephew who live in an old mansion that was moved from England to the states over one hundred years ago.   The children have been abandoned by two nannies, one aunt, and their father.  Death hangs over their head like a noose and the children themselves are more than a little odd.

Andy goes down to Southern Ohio on the condition that her ex never contacts her again after she does this for him.  He's also going to pay her enough money to financially liberate her forever.   Andy's plan is to get things back together and get the kids out of the house in less than a month.  Unfortunately,  the children are held to the house my some particularly malevolent ghosts and Andy is going to need help from her ex-husband and everyone else to deal with the evil lurking in the shadows of the old house.  She also has to confront her own demons and awaken her lost love to free the children from the ghosts.

Maybe This Time was not only a good ghost story, but a very well written novel with an engaging plot.    I would recommend it to anyone.   St. Martin's press has also offered to give one free copy of this book away to one of my readers.  So, if you would like to read this wonderful Gothic romance,  comment below and I will enter you in the contest!
Email Post
Labels: Book Giveaways Book Reviews ghost stories Gothic Romances Jennifer Crusie Maybe This Time

Heart Centered Psychic said…
I LOVE all books! Any book that combines romance and ghost stories? Is a 'must read!"
September 8, 2010 at 11:49 AM

Just wanted to stop by to say thank you for following my blog! I look forward to visiting yours as well!